A new statue of Mary? 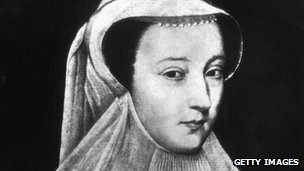 Author Melanie Clegg reports on an exhibit about Mary.
http://madameguillotine.org.uk/2013/08/18/the-mary-queen-of-scots-exhibition/

The Dumbing Down of History

Here is a review of the first episode of "Reign" from USA Today. It sounds dreadful.

It may be too much to hope that CW would help educate our children, but we could at least ask the network to avoid making them stupid.

That risk of a generational dumbing-down assumes, of course, that any of those children actually slog their way through this ludicrously written, dully cast, anachronistic blunder, which churns Mary Queen of Scots though the CW Gossip Girl blender. All poor Mary wants to do is marry her handsome prince and rule Scotland and France combined, while kicking off her shoes now and then to dance, dance, dance! Why is everyone so mean to her?

In Reign (* out of four, tonight, CW, 9 ET/PT), Adelaide Kane, 23, stars as the young Scottish queen, who, as we meet her in 1557, is living in a French convent for her own protection. Finally, she's called back to the French court, where her only friends are four ladies-in-waiting who have clearly been spending their time mastering makeup and hair tricks that must make them the envy of their 16th-century peers.

Mary is all set to marry her betrothed, that dashing, bestubbled stud muffin Prince Francis (Toby Regbo). Francis, however, has other ideas. So do his scheming mother, Queen Catherine (Megan Follows, one of the few members of the cast who escapes with her reputation unscathed) and his dangerously handsome half-brother Bash (Torrance Coombs).

Which is all just fabulous. Except that Mary was 15 when she married Francis and he was only 14 and so sickly that he would be dead in less than two years. Francis did not have a half-brother, Bash. Mary — who by all accounts was pampered and adored by her royal future father-in-law — was never exiled to a convent, And neither of them, as far as history knows, ever dealt with some Phantom of the Opera specter who roamed the hidden corridors of the palace.

On the other hand, her name was "Mary," so there's that. One can only wait for the spin-off, starring her cousin Elizabeth as a vampire who's fallen hopelessly in love with a werewolf.

Only a pedant would demand absolute fealty to the historical record from a network drama, but this isn't so much an adaptation of Mary's story as an abrogation. Her life has fascinated people — including many in CW's target age range — for generations. Why substitute some risible, derivative, soap-opera drivel of your own limited invention?

There's much young people could learn from Mary's actual story, starting with the dangers of excessive romanticism and an enlarged sense of entitlement. But Reign leaves them ill-equipped to understand it, if it doesn't completely remove any interest they might have in hearing it. This is a show, and a network, that doesn't just insult your intelligence; they assume you don't have any.
Prove them wrong. http://www.usatoday.com/story/life/tv/2013/10/16/reign-review/2994343/

I was reading comments about "Reign" on the Historical Fiction forum. Members are unimpressed with it!

Meh, I'm withholding judgment until I see it for myself. [And I missed the premier, drat!] I've been doing some research on Mary, Queen of Scots for fun. It's not a subject I'm particularly invested in so I doubt I'll mind its more flagrant inaccuracies than a 16th century scholar. Maybe it'll be fun.