The Execution of Mary Stuart

The Execution of Mary Stuart

The Queen of Scots, having been unjustly imprisoned by her cousin Queen Elizabeth of England for twenty years, was beheaded after a sham trial. According to an eye-witness account:


Then she, being stripped of all her apparel saving her petticoat and kirtle, her two women beholding her made great lamentation, and crying and crossing themselves prayed in Latin. She, turning herself to them, embracing them, said these words in French, 'Ne crie vous, j'ay prome pour vous', and so crossing and kissing them, bad them pray for her and rejoice and not weep, for that now they should see an end of all their mistress's troubles.
Then she, with a smiling countenance, turning to her men servants, as Melvin and the rest, standing upon a bench nigh the scaffold, who sometime weeping, sometime crying out aloud, and continually crossing themselves, prayed in Latin, crossing them with her hand bade them farewell, and wishing them to pray for her even until the last hour.
This done, one of the women have a Corpus Christi cloth lapped up three-corner-ways, kissing it, put it over the Queen of Scots' face, and pinned it fast to the caule of her head. Then the two women departed from her, and she kneeling down upon the cushion most resolutely, and without any token or fear of death, she spake aloud this Psalm in Latin, In Te Domine confido, non confundar in eternam, etc. Then, groping for the block, she laid down her head, putting her chin over the block with both her hands, which, holding there still, had been cut off had they not been espied. Then lying upon the block most quietly, and stretching out her arms cried, In manus tuas, Domine, etc., three or four times. Then she, lying very still upon the block, one of the executioners holding her slightly with one of his hands, she endured two strokes of the other executioner with an axe, she making very small noise or none at all, and not stirring any part of her from the place where she lay: and so the executioner cut off her head, saving one little gristle, which being cut asunder, he lift up her head to the view of all the assembly and bade God save the Queen. Then, her dress of lawn [i.e. wig] from off her head, it appeared as grey as one of threescore and ten years old, polled very short, her face in a moment being so much altered from the form she had when she was alive, as few could remember her by her dead face. Her lips stirred up and a down a quarter of an hour after her head was cut off.

There is a great deal of similarity between Mary of Scotland and her descendant, Marie-Antoinette. Both possessed immense beauty, charm, and joie de vivre, along with the ability of inspiring either great love or great hatred. Both are icons of romance and passion, when, in all probability, they had very little actual romance or passion in their personal lives, especially when compared to the sorrows they had to bear.

Mary and her first husband, Francis II of France, seemed to have a deep and genuine affection for each other, in spite of the fact that he was afflicted with health problems (like most of the Valois.) Her other two husbands, however, were total and complete wretches, who made Mary's life a living hell. Antonia Fraser, in her stellar biography of Mary, conjectures that the Scottish queen fell in love with her cousin Darnley, before she found out what he was. Other biographers, such as Alison Weir and John Guy, believe that she married Darnley not out of love but to solidify her claim to the English throne, since Henry Stewart was also an heir.

At any rate, Darnley was abusive in every way, and unfaithful. He plotted against her, threatening to declare her child illegitimate, telling the Pope and the King of France that she was a bad Catholic, while participating in the murder of her secretary David Rizzio before her eyes. (I might have been tempted to put gun powder under his bed, too.) However, there is overwhelming proof that Mary had nothing to do with Darnley's death, as Fraser, Guy, and Weir all describe in detail. I would especially recommend Alison Weir's excellent Mary Queen of Scots and the Murder of Lord Darnley, in which the events of Kirk o'Field are retraced with precision, exonerating Mary beyond all doubt. Weir shows how Mary was planning to reconcile with Darnley and live with him again, for their son's sake, when the Scottish lords had Darnley strangled, before blowing up his house.

As for the marriage with Bothwell, all three biographers mentioned above believe that Mary was kidnapped and raped by him; when she discovered that she was pregnant she assented to a wedding. There was no great romance. She later tried to have the marriage annulled.

Mary should have returned to France after the defeat at Carberry Hill and her subsequent escape from her initial captivity. In France, she had lands as Dowager Queen, and her grandmother was still alive. Instead, she went to England and throwing herself upon Elizabeth's mercy. Big mistake. But I think she did not want to be too far from her infant son James, with whom she hoped to be reunited, as only a mother can hope.

Mary, like Marie-Antoinette, is often dismissed as being stupid. She did make some imprudent choices, that's for certain. John Guy's biography carefully offers proofs that, in spite of everything, Mary often showed herself to be an astute politician, who successfully played her enemies against each other, avoiding some potential disasters early in her rule. The fact that her personal reign lasted as long as it did, in the turbulent era of the Scottish Reformation, when she was surrounded by those who believed she was Jezebel just because she was Catholic, is remarkable. She would have had to have been more ruthless and cruel, less merciful and tolerant, to have been a successful monarch in that particular time and place. Her abdication, and many of the disastrous decisions she made in those fateful months, happened when she was recovering from assault and a miscarriage/stillbirth. She was obviously going through some kind of breakdown.

Almost half of Mary's life was spent as a prisoner, separated from her only surviving child, who was taught to despise his mother as a harlot. When accused of plotting Elizabeth's murder, forged letters were used against her, and she was deprived of counsel. As she declared at her trial:


I do not recognize the laws of England nor do I understand them, as I have often asserted. I am alone without counsel or anyone to speak on my behalf. My papers and notes have been taken from me, so that I am destitute of all aid, taken at a disadvantage.

Before her execution, Mary was told that her life would be the death of the Protestant religion, but her death would be its life. The ultimate reason for her demise was the fact that she was a Catholic queen. With that in mind, she approached the scaffold.
http://teaattrianon.blogspot.com/2008/02/execution-of-mary-queen-of-scots.html 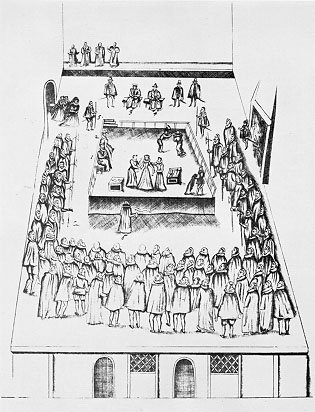 What a gruesome event!

It is quite haunting to think, as you have pointed out, that not only Mary herself but many of her descendants, including Charles I, Louis XVI and Marie-Antoinette had such tragic lives. 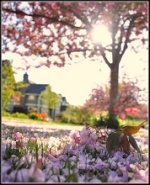 My often tragic Belgian royals must also be her descendants, since they descend from Maria Carolina, who was Marie-Antoinette's sister.

Oh, yes, they certainly are. Isn't it strange that most of the royalty of Europe would be descended from that brief and tragic union of Mary and Darnley?
_________________
Je pardonne à tous mes ennemis le mal qu’ils m’ont fait.

Thank you! I always loved her signature!

Today we remember the Mary. 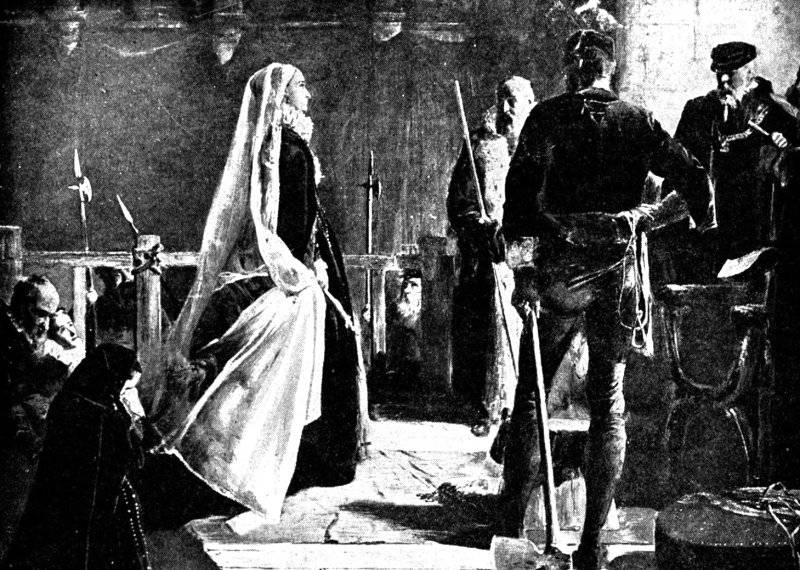 Babington and his fellows were now arrested, tried and executed, then Mary’s trial began (14 and 15 October). A death sentence was the object desired, and it was of course obtained. Mary freely confessed that she had always sought and always would seek means of escape. As to plots against the life of Elizabeth, she protested “her innocence, and that she had not procured or encouraged any hurt against her Majesty”, which was perfectly true. As to the allegation of bare knowledge of treason without having manifested it, the prosecution would not restrict itself to so moderate a charge. Mary, moreover, always contended that the Queen of Scotland did not incur responsibilities for the plottings of English subjects, even if she had known of them. Indeed, in those days of royal privilege, her rank would, in most men’s minds, have excused her in any case. But Lord Burghley, seeing how much turned on this point of privilege, refused her all signs of royalty, and she was condemned as “Mary Stuart, commonly called Queen of Scotland”.

If ever you start feeling sorry for yourself for hardships you're enduring, think of Mary Queen of Scots, and count your blessings. Here was a woman who:

was widowed by the age of nineteen;

inherited a throne of a people who did not want her because she was "foreign" and Catholic;

married a man who plotted to overthrow and imprison her while she was pregnant with his child;

was forced to marry her third husband, after her second husband's untimely death, because he had allegedly taken her by force;

was betrayed by her closest advisors in an uprising, and deposed;

when seeking refuge in England under her cousin Queen Elizabeth, was imprisoned unjustly instead;

languished in prison for nineteen years, much of that time suffering from gastric disorders that occasioned bouts of vomiting and fever, only to be told by her jailers she was faking it;

was betrayed by her only son (raised a Puritan in Scotland) when he secured an alliance with Queen Elizabeth;

was lured into the Babington plot by the machinations of Walsingham, and beheaded for it;

and whose last wishes, including a Catholic burial, were never honored by Queen Elizabeth.

When they arrested her shortly before her execution, Mary cried, "I desire neither goods, honours, power nor worldly sovereignty, but only the honor of His Holy Name and His Glory and the liberty of His Church and of the Christian people." Queen Mary died with the courage of a martyr, and Pope Benedict XIV noted that nothing stood in the way of declaring her a martyr for the faith except for lingering historical doubts about her second husband Darnley's death. Mary's confessor, however, proclaimed her absolute innocence in the matter.