Albert succeeded his childless older brother, Baudouin, upon the latter's death in 1993.

A commemoration of the Golden Wedding of Albert and Paola, in 2009:
http://crossoflaeken.blogspot.com/2009/07/golden-wedding-of-king-albert-ii-queen.html

The heir to the throne, Prince Philippe:

Pictures of Paola, who was a stunning beauty as a young woman. The song is 'Dolce Paola', dedicated to the Princess in 1965 by fellow Belgo-Italian Salvatore Adamo.

Very interesting. Thank you for introducing me to all of these people!

I guess it is appropriate to put this in the thread on Albert II, since it deals with one of the most pressing issues of his reign. Michael Palo has written a thoughtful review of Belgium and the Monarchy: from National Independence to National Disintegration, an adapted English translation of Herman van Goethem's book De monarchie en ‘het einde van België’: Een communautaire geschiedenis van Leopold I tot Albert II.

The last two chapters focus on the main highlights of the constitutional process of devolution in Belgium during the reigns of King Boudewijn (1951-93) and his brother, King Albert II (1993 to the present). The one thing both monarchs had in common is a reluctance to encourage anything that would threaten the integrity of the country as a nation-state, and, while they have remained well within the confines of their roles as constitutional monarchs, their opposition to separatism, which comes out in royal messages, has not made them popular among many Flemings. By the same token, however, they benefited from a growing royalism among French-speakers in general and Walloons in particular.

When the language census of 1947 indicated a growth in the number of French-speakers on the periphery of Brussels and led to an increase in the number of the city’s municipalities from 16 to 19, Flemings protested. Spearheaded by a new Flemish nationalist party - Volksunie (VU) (the People’s Union) founded in 1954 - the Flemings began marching on Brussels and boycotted en masse the language census of 1961. The renewed militancy among Flemings reinforced the feeling among Walloons, in the wake of the abortive strikes of 1961, that the only way to limit the impact of economic and fiscal policies that they perceived were detrimental to the industrial heartland of their region was to encourage further devolution of power to Wallonia. Such was the background to the so-called Gilson Language Laws of 1962-63, which fixed the linguistic frontier, so that the bilingual district of Brussels-Capital City was limited to 19 communes. In six communes surrounding Brussels - Drogenbos, Kraainem, Linkebeek, Sint-Genesius-Rode, Wemmel, and Wezembeek-Oppem - facilities for French-speakers, such as being able to deal with officials in French and having their children educated in the language of their choice, were to be provided. Language facilities were also guaranteed for the 70,000 or so German-speakers in the eastern part of the country.

More controversial, despite the guarantee of language facilities, was the transfer of the Voeren (Fourons) from the Province of Liège to the Province of Limburg. As Van Goethem writes: "Between 1970 and 1990 the Voer district was constantly in the news, largely because of the refusal of the local burgomaster, a farmer named José Happart, to use the Dutch language. . . . Happart’s principled stand not only led to street fights in the otherwise peaceful villages of the Voer, but also became a casus belli between the Flemings and Walloons, splitting national political life neatly down the linguistic middle and occasionally leading to the fall of the government."

The state reforms of 1970 came at the end of a decade that saw the appearance of two new political parties - the Brussels-based Front Démocratique des Francophones (not the Front des Francophones as called by Van Goethem) and the Rassamblement Wallon, which won their first parliamentary seats in the general election of March 1968. At the same time, radical Flemish student organisations succeeded in getting the French section of the Catholic University of Leuven transferred to Walloon Brabant (specifically to Ottignies, now called Louvain-la-Neuve) after a vehement campaign "with their insulting (but nonetheless popular) slogans, such as Walen buiten (Walloons Out!) and Leuven Vlaams (Leuven for the Flemish!)."

The key constitutional changes took place in 1970, 1980, and 1993. They created three Regions and three linguistic Communities with their respective Councils and Executives that would be able to issue decrees and sign treaties with foreign countries in matters for which they had competence. Legislation affecting the linguistic communities from 1970 on had to be the consequence of ‘special majority law’ that ‘could only be passed if there was a majority in favour in both the Flemish and Walloon groupings in both the Lower House and the Senate, on condition that a majority of the members of each language grouping was present during the vote and on condition that the resulting number of votes in favour of the law exceed two-thirds of the total number of votes cast.’ In addition, there was an alarm bell procedure: "If a proposed law threatened to seriously disrupt relations between the Dutch-speaking and French-speaking communities, it was possible for the parliamentary passage of this law to be temporarily suspended if this was requested by a motion of deferment signed by three-quarters of the members of a particular language grouping. In this case, the proposed law would be forwarded to the ministerial council, which would issue its findings on the matter in 30 days." As Van Goethem stresses, these measures were designed to protect the Walloon minority, as was the rule that "there would be equal numbers of Dutch-speaking and French-speaking ministers."

Following the elections of November 1991, which saw the breakaway Vlaams Blok (Flemish Bloc) win 12 of 212 seats in the Chamber of Representatives, that is, two more seats than the VU, inter-party negotiations led to the signing of the St. Michael (St. Michel/St. Michiels) Accord on 29 September 1992. Article 1 of the Constitution amended in 1993 now read: "Belgium is a federal state, composed of different regions and communities." From now on, members of the Regional and Community Councils were to be directly elected, while further responsibilities and powers were devolved to them.

I must admit that I did not like the reviewer's vaguely ominous comments about the intentions of Leopold III during World War II. While discussing his 1944 Political Testament, Palo claims that the King "had done nothing less than outline an authoritarian future for his country." This suggests that the Political Testament was a call to change the Belgian Constitution radically along authoritarian lines, which it was not. In fact, in the same document, Leopold noted that his role, as a constitutional monarch, did not allow him to take sides with one political doctrine or program or another. Rather, he said, it was for the Belgian people, freely consulted, to decide upon any possible changes to the political structure of the kingdom after the war.

King Albert II is abdicating on July 21 in favor of his son, Prince Philippe: 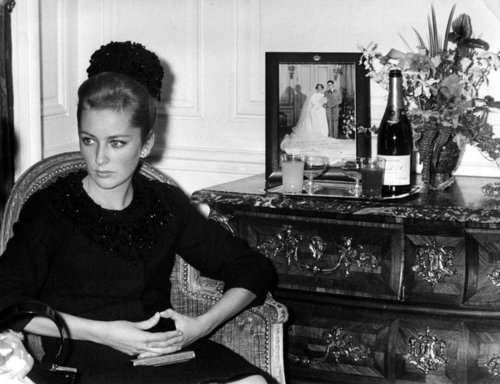 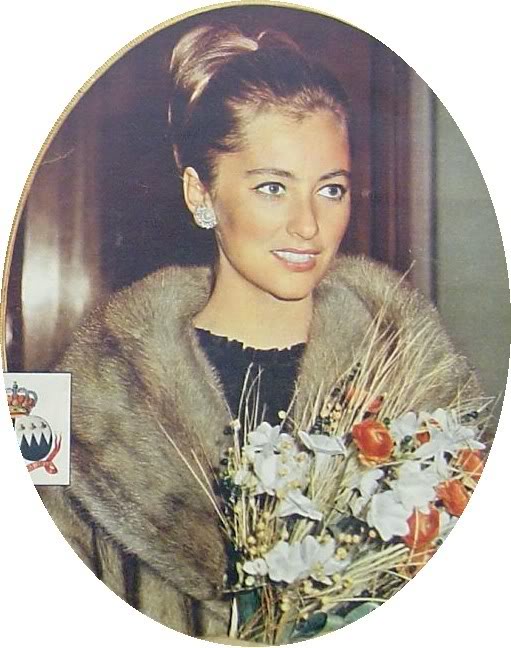 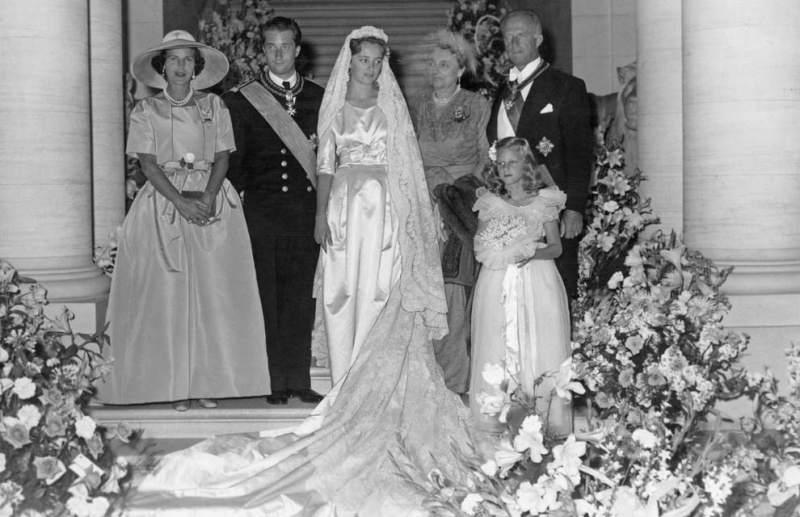 Not exactly in chronological order, but here are some lovely pictures of a young Paola. More here:
http://www.hellomagazine.com/royalty/2013070413343/queen-paola-belgium-young-beauty/
http://arrayedingold.blogspot.com/2012/06/dolce-paola.html 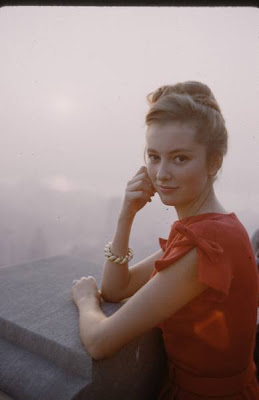 Albert and Paola met in Rome in 1958 during celebrations at the Belgian embassy to mark the coronation of John XXIII. They were hoping to get married in the Vatican, but for political reasons it was not possible, so the wedding took place in Brussels instead. Paola was the first Mediterranean bride to marry into the Belgian royal family. Before that, they tended to marry Northern European princesses (French, German, Swedish, etc.) . So I guess a little sunshine finally burst in upon all the rain, snow and ice.

An article from July 1959 on the wedding of Albert and Paola:

Not sure, though, why the author talked about the "fresh breeze of democracy" coming into the "traditionally feudal" Belgian royal family...Did she not realize that the Belgian monarchy, born in 1831, was already a very liberal one...hmm.... 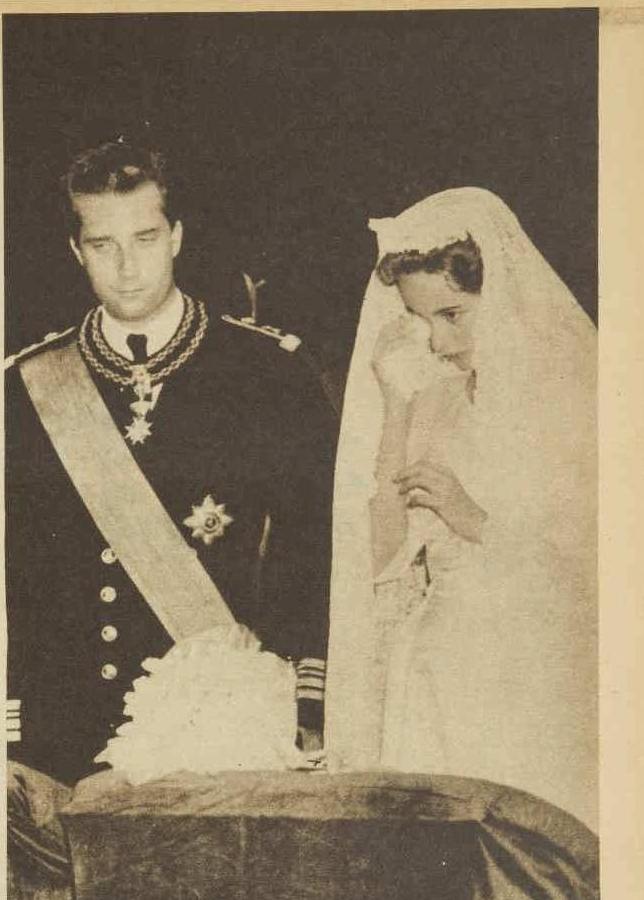 The bride, moved to tears. 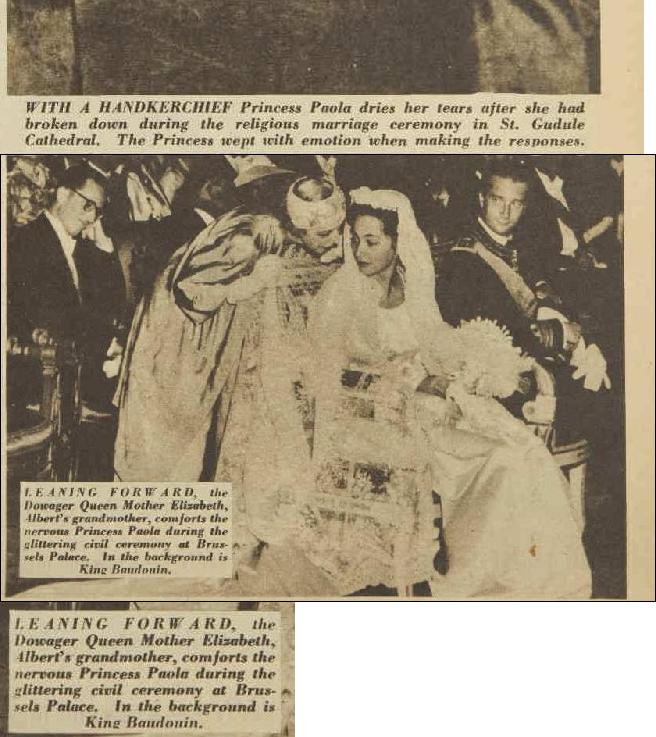 Dowager Queen Elisabeth, the grandmother of the bridegroom, comforting the bride during the civil ceremony. The young King Baudouin is in the background.

My post on the marriage of Albert and Paola in July 1959.

Only 21 years old at the time, Paola was a shy, tender, sensitive young woman, who must have suffered severely during the long period of estrangement from her husband.

At the time of the wedding, of course, all the marital troubles were in the future, and Belgians simply rejoiced in the passionate romance of King Baudouin's winsome younger brother and the stunning, delicate Italian beauty. The cheer of the marriage celebrations was a welcome change from decades of grimness, beginning with the deaths of King Albert I and Queen Astrid, and continuing through World War II, the Nazi occupation, the Royal Question, the abdication of King Leopold III, and the endless, festering controversy over his role at the palace after his son's accession to the throne. King Baudouin would not marry Doña Fabiola, his popular Spanish queen, for over another year, making Paola the first Southern European bride to join the Belgian royal family. Previously, the Belgian princes had chosen consorts from countries further to the north, as illustrated by Louise-Marie of France, Marie-Henriette of Austria, Elisabeth of Bavaria, and Astrid of Sweden. The marriage of Albert and Paola would give Belgium an Italian queen; as an interesting mirror image, the marriage of Albert's aunt, Princess Marie-José, to Prince Umberto of Savoy, had already given Italy a Belgian queen. Despite the discord, and rumored infidelity, that would plague the marriage of Albert and Paola in the years to come, the prince would ultimately be shown to have been wise in his choice of spouse. As the sixth Queen of the Belgians, reconciled to her husband, and dedicated to her children and grandchildren, Paola would prove to be a mature, tasteful, gracious, steady and supportive matriarch of the royal family. Following Albert's abdication, it is to be hoped that she will enjoy many peaceful and happy years.