The Honours of Scotland

The Honours of Scotland

Photo of the Honours of Scotland. They consist of the crown of Scotland, the Scepter of Scotland and the Sword of State. The Crown, in its present form dates from 1540 when King James V ordered the original crown refashioned. The circlet base is made from Scottish gold and encrusted with 22 gemstones and 20 precious stones. It also has freshwater pearls from Scotland’s rivers. The Scepter was a gift from Pope Alexander VI to King James IV in 1494. It is made of silver gilt and topped with polished rock and a Scottish pearl. The Sword of State was also a papal gift. It was presented to King James IV in 1507 by Pope Julius II. It has a silver gilt handle bearing figures of oak leaves and acorns 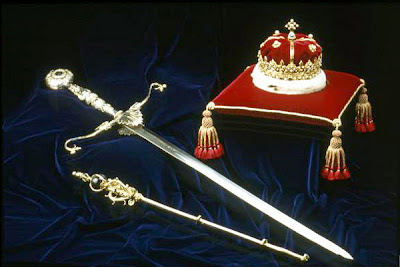