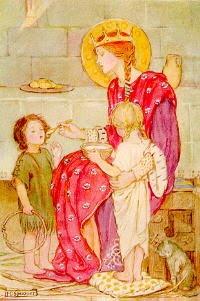 St. Margaret (1045-1092) was a royal Saxon princess. From a dethroned and exiled family, riches and power meant nothing to her, for she saw how quickly such things can pass away. Consequently, she was deeply drawn to the monastic life. However, the Scottish King Malcolm Canmore sought her hand in marriage, so attracted was he by her beauty and virtue. They were married. Malcolm was on the wild side, but he and Margaret loved each other completely, and died three days apart.

As Queen of Scots, St. Margaret bore eight children, was devoted to the poor, and helped to reform the liturgy. As one article states:

Under Queen Margaret's leadership Church councils promoted Easter communion and, much to joy of the working-class, abstinence from servile work on a Sunday. Margaret founded churches, monasteries and pilgrimage hostels and established the Royal Mausoleum at Dunfermline Abbey with monks from Canterbury. She was especially fond of Scottish saints and instigated the Queen's Ferry over the Forth so that pilgrims could more easily reach the Shrine of St. Andrew.
Mass was changed from the many dialects of Gaelic spoken throughout Scotland to the unifying Latin. By adopting Latin to celebrate the Mass she believed that all Scots could worship together in unity, along with the other Christians of Western Europe. Many people believe that in doing this, it was not only Queen Margaret's goals to unite the Scots, but also Scotland and England in an attempt to end the bloody warfare between the two countries.
In setting the agenda for the church in Scotland Queen Margaret also ensured the dominance of the Roman Church over the native Celtic Church in the north of the country.

It is interesting how St Margaret championed the practices of the Roman rite over the Celtic traditions, although I have no doubt that the Celtic liturgy and devotions were quite beautiful. St. Margaret, however, saw the importance of harmony of worship for the people of her country, especially after the upheavals of their century.