She was born on January 6, the Epiphany, a day symbolic on many levels. It is the 600th anniversary of her birth.

In French Jeanne d’Arc; by her contemporaries commonly known as la Pucelle (the Maid).

Born at Domremy in Champagne, probably on 6 January, 1412; died at Rouen, 30 May, 1431. The village of Domremy lay upon the confines of territory which recognized the suzerainty of the Duke of Burgundy, but in the protracted conflict between the Armagnacs (the party of Charles VII, King of France), on the one hand, and the Burgundians in alliance with the English, on the other, Domremy had always remained loyal to Charles.

Jacques d’Arc, Joan’s father, was a small peasant farmer, poor but not needy. Joan seems to have been the youngest of a family of five. She never learned to read or write but was skilled in sewing and spinning, and the popular idea that she spent the days of her childhood in the pastures, alone with the sheep and cattle, is quite unfounded. All the witnesses in the process of rehabilitation spoke of her as a singularly pious child, grave beyond her years, who often knelt in the church absorbed in prayer, and loved the poor tenderly. Great attempts were made at Joan’s trial to connect her with some superstitious practices supposed to have been performed round a certain tree, popularly known as the “Fairy Tree” (l’Arbre des Dames), but the sincerity of her answers baffled her judges. She had sung and danced there with the other children, and had woven wreaths for Our Lady’s statue, but since she was twelve years old she had held aloof from such diversions. 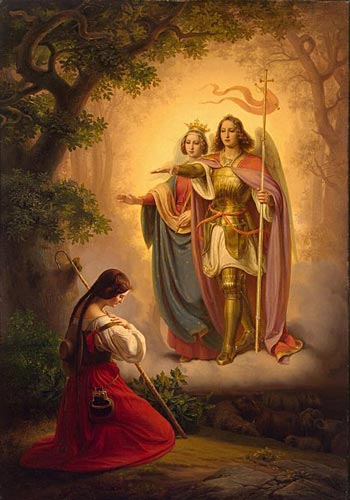 It was at the age of thirteen and a half, in the summer of 1425, that Joan first became conscious of that manifestation, whose supernatural character it would now be rash to question, which she afterwards came to call her “voices” or her “counsel.” It was at first simply a voice, as if someone had spoken quite close to her, but it seems also clear that a blaze of light accompanied it, and that later on she clearly discerned in some way the appearance of those who spoke to her, recognizing them individually as St. Michael (who was accompanied by other angels), St. Margaret, St. Catherine, and others. Joan was always reluctant to speak of her voices. She said nothing about them to her confessor, and constantly refused, at her trial, to be inveigled into descriptions of the appearance of the saints and to explain how she recognized them. None the less, she told her judges: “I saw them with these very eyes, as well as I see you.”

Great efforts have been made by rationalistic historians, such as M. Anatole France, to explain these voices as the result of a condition of religious and hysterical exaltation which had been fostered in Joan by priestly influence, combined with certain prophecies current in the countryside of a maiden from the bois chesnu (oak wood), near which the Fairy Tree was situated, who was to save France by a miracle. But the baselessness of this analysis of the phenomena has been fully exposed by many non-Catholic writers. There is not a shadow of evidence to support this theory of priestly advisers coaching Joan in a part, but much which contradicts it. Moreover, unless we accuse the Maid of deliberate falsehood, which no one is prepared to do, it was the voices which created the state of patriotic exaltation, and not the exaltation which preceded the voices. Her evidence on these points is clear.

Although Joan never made any statement as to the date at which the voices revealed her mission, it seems certain that the call of God was only made known to her gradually. But by May, 1428, she no longer doubted that she was bidden to go to the help of the king, and the voices became insistent, urging her to present herself to Robert Baudricourt, who commanded for Charles VII in the neighbouring town of Vaucouleurs. This journey she eventually accomplished a month later, but Baudricourt, a rude and dissolute soldier, treated her and her mission with scant respect, saying to the cousin who accompanied her: “Take her home to her father and give her a good whipping.” (Read entire post http://nobility.org/2012/01/05/joan-of-arc/.)