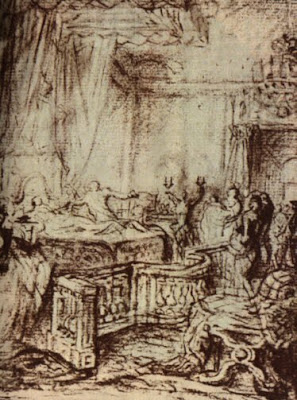 From History and Other Thoughts:
http://historyandotherthoughts.blogspot.com/2011/09/birth-of-madame-royale.html

Marie Antoinette began to feel the first contractions just after midnight on December 19, 1778. As soon as the news of the impending birth spread, crowds began to arrive.The King had the tapestry screens that surrounded the bed secured with cords to avoid them being thrown down upon the Queen. In the end, the room was so crowded it was impossible to move and, to get a better site of Her Majesty, two Savoyards even got upon the furniture! The Queen, however, was still able to walk around the room till 8am, when she finally took to her bed.

The baby was born at about 11:30 am, but it wasn't the eagerly, long-awaited hair. Marie Antoinette had given birth to a fair-haired, blue-eyed daughter, Marie Therese. The Queen still ignored the sex of the baby. The Princess De Lamballe was supposed to shout "Il figlio è nato" for a boy, or "La figlia è nata" for a girl to let the Queen know the sex of her newborn baby, but overwhelmed by emotion, she only managed to say "La regina è andato" (the Queen went) before fainting.

Marie Antoinette wasn't well either. The crowd of people in the room, the lack of air, the pain, were all too much for her. She had a convulsive fit and fainted. The King* sprung forward and opened the windows (they had been nailed to keep the cold winter air outside the drafty Palace). The Court’s chief surgeon used his lancet and sliced into her foot, causing it to bleed. The Queen opened her eyes and slowly, for some people didn't want to leave and had to be dragged out, the room started to empty.

Marie Antoinette learned the sex of her baby only an hour and a quarter after Marie Therese's birth, and said: "Poor little girl, you are not what was desired, but you are no less dear to me on that account. A son would have been the property of the state. You shall be mine; you shall have my undivided care; you will share all my happinesses and you will alleviate my sufferings . . .”

At Versailles, not only the Queen, but princesses of the royal blood were required to give birth in public. Why? To prevent any substitution of the infant in case he was destined to reign. I say “he” by design, because France’s unwritten constitution prevented women to step unto the throne in their own right, though they could, and often did govern the Kingdom as Regents.

In the case of Marie-Antoinette, her first laying-in was all the more eagerly awaited that she had been married for eight years without presenting her husband with an heir. For a Queen, this was a glaring failure.

Her sister-in-law, the Comtesse d’Artois, married to the King’s youngest brother, had already been delivered of two healthy little boys. Marie-Antoinette had attended the deliveries, as required by the etiquette, and deeply felt the political and personal humiliation of her own childlessness.

Now at long last she herself was pregnant. The stakes could not be higher: if the child were stillborn, or a girl, the heir to the throne would remain the Comte de Provence, another brother of Louis XVI. The Comte de Provence was cunning, ambitious, and probably the most dangerous enemy of the royal couple. Every year that passed without Marie-Antoinette giving birth to a Dauphin brought him closer to the throne (to which he would eventually ascend, decades later, under the name of Louis XVIII.)

It was on the eve of her birthday in 1795 that Madame Royale was freed from the Temple prison.
http://vivelareine.tumblr.com/post/14411689805 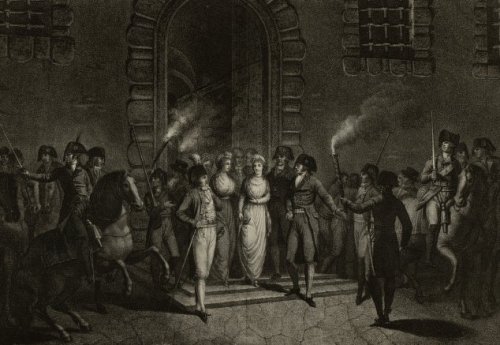 Here is an allegorical engraving celebrating the birth of the princess.

Right click on picture (view image). Off to the side it shows both the Ten Commandments and her astrological sign (Sagittarius, the archer.) Very interesting.

On October 19th, 1851, Marie Thérèse Charlotte - the daughter of Louis XVI and Marie Antoinette - died of pneumonia at Schloss Frohsdorf, Vienna. She was 72 years old.

She first became ill after catching a chill during her daily walk on October 12th. Her health quickly began to deteriorate. Four days later, on October 16th, she attempted to visit the Frohsdorf chapel to commemorate the fifty-eight anniversary of her mother’s death. She told her companions, who insisted she remain in bed: "Nothing could stop me from going to the chapel to render to the memory of my mother; I have never failed those duties." Despite her efforts, her extremely weak health prevented her from leaving her bed, and an abbe was sent to her bedside. She died on October 19th, just three days after the anniversary of the execution of her mother. Her last words were to her nephew Henri: "I am annihilated."

In her last will and testament, she wrote:

After the example of my parents, I pardon, with my entire soul, and without exception, all those who have injured or offended me… I pray to God to shower down His blessings upon France- France, that I have never ceased to love even under my bitterest afflictions.

And now it is her birthday again. Happy Birthday, Madame Royale!
http://tiny-librarian.tumblr.com/post/70526864192/yet-as-the-year-drew-to-a-close-with-the-first 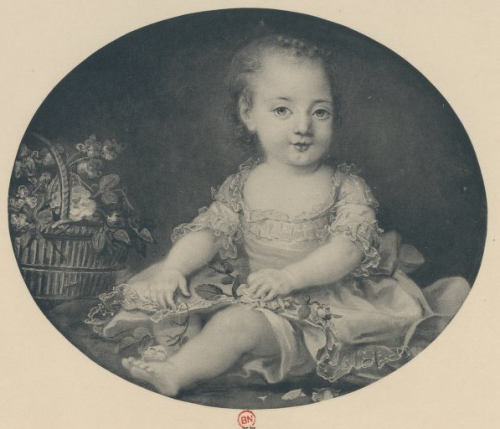 http://tiny-librarian.tumblr.com/post/105629565896/a-series-of-prints-about-the-birth-of-marie Some prints depicting the Birth of Madame Royale. 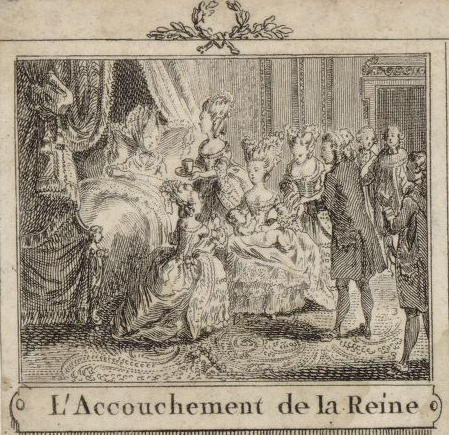 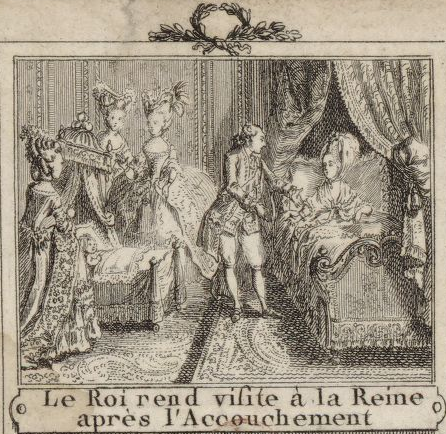 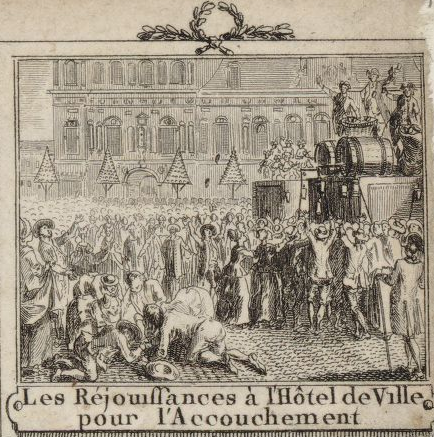