Did she suffer from post-traumatic stress disorder?

While researching the life of Marie-Thérèse-Charlotte of France for the novel Madame Royale, I explored the possibility that the daughter of Louis XVI and Marie-Antoinette may have suffered from what is now called post-traumatic stress disorder. PTSD includes the following persistent symptoms:

The Duchesse d'Angoulême certainly manifested most of the above symptoms, as is described in Joseph Turquan's biography and in the various memoirs of the era, particularly that of Madame de Gontaut. At the Tuileries, after the Restoration of 1814-15, the princess often suffered from insomnia, and could be heard pacing in her rooms at night. She was indeed irritable and temperamental, in spite of her basic kindness of heart. I am not certain if she had difficulty concentrating, although in Vienna in the late 1790's she was known to suddenly dart from the room. The Duchesse was always on her guard, keeping a bag of diamonds looped over the back of her chair "in case of an emergency." She carried a green satchel around with her containing several newspapers; she anxiously poured over the headlines everyday, watching for potential disaster. She jumped whenever she heard the bolt drawn or a key turn in a lock.

Traumatic events experienced as a child or adolescent can, according to scientific data, cause changes in the brain. Such events include extreme violence, rape or even of attempted rape, captivity, and losing family members in a disaster. The teenage Madame Royale witnessed the violence of a mob against her family on at least four occasions; although her family survived the attacks, others were killed and she saw heads carried on pikes. Hearing the obscenities and threats from the attackers would have been disturbing enough for a lifetime.

It is not known for certain whether or not Madame Royale was physically molested while alone in the Temple prison, but as Madame de Gontaut records in her Memoirs, the Duchesse confided that her Aunt Elisabeth ordered the teenager never to let the guards find her undressed or in bed, and so the girl would spend entire nights sitting in a chair, since she never knew when her captors would come bursting into the room. She emerged in 1795 as the "Orphan of the Temple" the only survivor of her immediate family.

Persistent avoidance and anxiety attacks are often part of the reactions of those with PTSD. As an adult Marie-Thérèse-Charlotte had great difficulty being in a crowd, which induced fainting and anxious behaviors. She would pointedly avoid the site where the guillotine had been and ask that her coach be driven around it.

Persons experiencing PTSD also frequently have trouble with memories, blocking out events which are then suddenly triggered by minor incidents, so that sometimes the account of their traumatic experience is subject to change. As a mature woman Marie-Thérèse-Charlotte wanted to change her account of the events she had recorded as a seventeen year old, still imprisoned in the Temple, and tried to buy up all the copies of the original memoir.

Much of the public moroseness that many contemporaries complained about was undoubtedly the princess' iron attempt to hold herself together, as well as depression, which she also most likely experienced. Her disposition became more affable when she left France in 1830 for a life of perpetual exile, focusing on raising her nephew and niece. Although the Duchesse loved France, she was probably better off away from the site of so many horrors. However, it was her resignation, constant charity, and kindness, combined with her strong faith, which got her through in the long run. Marie-Antoinette said to her daughter before being taken away: "You have faith. It will sustain you." Truly, it was faith that enabled Madame Royale to be an active and vibrant member of her extended family as well as a catalyst for rebuilding the Church and society in France, devastated by war and revolution.

I think she did, and it was debilitating.

Actually, there must have been many people in France who suffered from this type of problem, after the Terror.

I agree, there must have been.

Madame Royale and the Death of Innocence

She did not know why she had been spared. Her inner suffering increased as she discovered that it is sometimes more agonizing to live than to die....It would feel so strange to be out in the world again; so strange and so frightening. The Temple was the only home she had known since she was fourteen. To leave it would be severing the last links with her family. She would be going to a distant land, a penniless orphan, to relations she did not know. She, Madame Royale....

~From Trianon by Elena Maria Vidal

How dark must have been the thoughts of Marie-Thérèse-Charlotte of France on the midnight of December 18, 1795, the eve of her seventeenth birthday, as she prepared to be sent to her relatives in Austria. She had not only experienced a bloody revolution, but she had been subjected to verbal abuse and the constant threat of physical molestation. One by one, her parents, her brother, and her aunt had been taken away, until she was alone in the dreary Temple prison in Paris. Before being guillotined, Madame Elisabeth had instructed her niece not to ever let the jailers find her undressed or in bed. The young girl spent many nights sitting in a chair, trembling in the darkness, since when her candles burned out they were not replaced. Susan Nagel includes a great many more details in her biography Marie-Thérèse, Child of Terror: The Fate of Marie-Antoinette's Daughter.

The orphaned daughter of Louis XVI and Marie-Antoinette was aware that her small brother Charles was in the room below, ill and abused with no one to care for him. She was not permitted to see him and when he died of tuberculosis at the age of ten on June 8, 1795, she was not allowed to keep vigil by his corpse. Only when his body was removed was Madame Royale allowed to go down into the garden. She ever after harbored doubts as to whether her brother had really died. There were rumors that he had been replaced by another boy, rumors which are the subject of my novel Madame Royale.

Deborah Cadbury describes the torments to which the Dauphin was subjected in her marvelous book The Lost King of France. People have lamented that my novels have too much religion in them. Therefore, I was delighted to see that Cadbury makes reference to almost all of the same incidents in which the royal family displayed Christian fortitude, in their prayers and in the forgiveness of injuries. Cadbury relates how the Dauphin, when caught saying his prayers as his mother had taught him, was kicked in the face by Simon his jailer. The poor child was shown pornography, given alcohol, and pressured into accusing his own mother of incest. His sister Marie-Thérèse was present when he made the formal accusation. He grasped her hand before he was led away but she never saw him again.

The children of Louis XVI and Marie-Antoinette were not the only innocents to suffer during the Revolution. Many French people, particularly the peasants of the Vendée, rebelled against the Liberty, Equality, and Fraternity that were being imposed upon them through bloodshed. They resented their churches being taken over and eventually closed by Republic, while the priests were killed or exiled. They took up arms and Austrian scholar Eric von Keuhnelt-Leddihn describes the harsh brutality which the Revolutionary government exercised upon the uncooperative citizens. General Westermann and his bleus were especially notorious for their sadism towards children. There were atrocities all over the Vendée, and in Lyon and other French towns and cities where the Revolution was not appreciated. It was the blueprint for the mass murders of the totalitarian regimes of later centuries. Many children died, many young lives were shattered at the dawn of the modern world. Madame Royale was the living symbol of all the lost children of France. 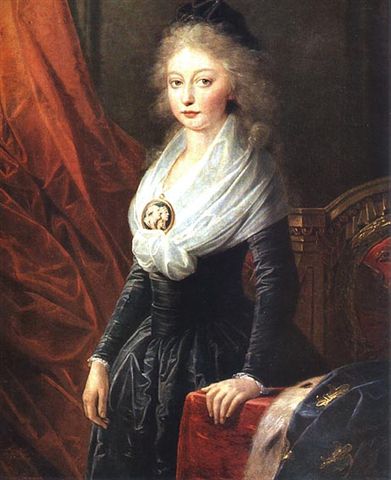