Who is online?
In total there are 4 users online :: 0 Registered, 0 Hidden and 4 Guests 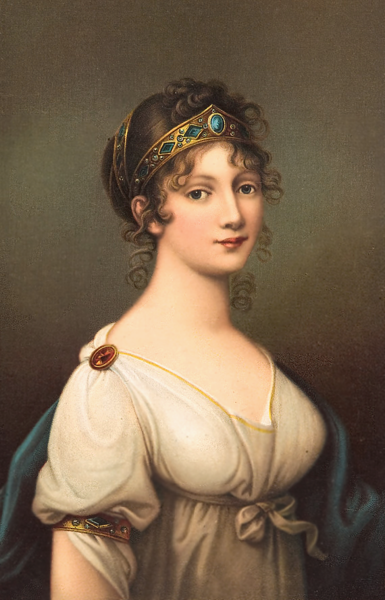 Louise of Mecklenburg-Strelitz, Queen of Prussia, became a Protestant icon to the foes of Napoleon Bonaparte, even as Marie-Thérèse of France was the Catholic icon. According to Susan Nagel in Marie-Thérèse, Child of Terror, Louise and Marie-Thérèse were friends, their mothers having been raised together. Louise's mother, Friederike of Hesse-Darmstadt, who died when Louise was a small girl, corresponded with Queen Marie-Antoinette, so that the two girls felt a certain kinship. Both Louise and Marie-Thérèse were among the few people who did not feel the need to cower before Bonaparte and his army; each made a heroic stand. Napoleon referred to Queen Louise as his "beautiful enemy." He tried to ruin her prestige by destroying her reputation but succeeded only in making the Queen more beloved by her people.

The painter Madame Vigée-Lebrun described Queen Louise as only an artist could:

But here my pen must remain powerless for it cannot convey the impression that my first meeting with the Princess made upon me. Her charming and heavenly face shone with an expression of gentle virtue and she possessed the finest and most regular features....She was in deep mourning and wore a crown made with spikes of jet which, far from unbecoming, gave her pallid cheeks a certain radiance.

After her untimely death in 1810 at the age of thirty-four, Queen Louise became a romantic figure in the century that followed. She was painted posthumously many times, her portrait appearing even on china. The legacy of Queen Louise, however, is not her physical beauty but her refusal to give in to fear. She learned that not being afraid is half the battle; her infectious courage gave heart to a nation.