Chateaubriand, Madame Récamier and the Salon

Chateaubriand, Madame Récamier and the Salon

There is a chapter in Madame Royale about the famous salon of Madame Récamier. Salons were gatherings of like-minded people to discuss art, politics and literature, usually at the house of a lady of society who, as a skilled hostess, would draw out her guests and keep the conversation moving along. Madame Récamier was not a great intellectual, but she loved books, and possessed the gift of listening. To quote Amelia Gere Mason in The Women of the French Salons:

Mme. Récamier represents better than any woman of her time the peculiar talents that distinguished the leaders of some of the most famous salons. She had tact, grace, intelligence, appreciation, and the gift of inspiring others. The cleverest men and women of the age were to be met in her drawing room. One found there genius, beauty, esprit, elegance, courtesy, and the brilliant conversation which is the Gallic heritage.

Madame Récamier would feed her guests well, then preside over the discussions while reclining on a sofa, usually wrapped in a yellow shawl. In her youth during Napoleon's reign, she became famous for the "shawl dance" which she would perform with her hair trailing down, and she had many admirers. For Juliette Récamier (1777-1849) was one of the greatest beauties of the era, and yet she also had a reputation for virtue. Many nobles and princes tried to seduce her but without success; she remained faithful to her husband.

As a very young girl she had been given in marriage to a wealthy man three times her age. The marriage was more of an adoption than true wedlock and was probably a union in name only. Once when a Prussian prince begged for her hand in marriage, Juliette thought about seeking an annulment, but Monsieur Récamier begged her not to leave him. She stayed with him until his death, even after he lost all his money and Juliette had to exchange her elegant house for a room in a former monastery. Nevertheless, such was the legend of her salon that famous authors and artists continued to meet at her dwelling. One of the most prestigious was the great Chateaubriand.

The Vicomte de Chateaubriand (1768-1848) was the father of French Romanticism, for in his writings are the fascinations with death, mysticism, unrequited love, and nonconformity that came to characterize the Romantic movement. As one article says:

Chateaubriand is chiefly significant as marking the transition from the old classical to the modern romantic school. The fertility of ideas, vehemence of expression and luxury of natural description, which he shares with the romanticists, are controlled by a discipline learned in the school of their predecessors. His palette, always brilliant, is never gaudy; he is not merely a painter but an artist. He is also a master of epigrammatic and incisive sayings. Perhaps however, the most truly characteristic feature of his genius is the peculiar magical touch which Matthew Arnold indicated as a note of Celtic extraction, which reveals some occult quality in a familiar object, or tinges it, one knows not how, with "the light that never was on sea or land."

Chateaubriand also had a career as a politician and a diplomat, as well as a lover. During the French Revolution he married a wealthy young girl and they made each other very unhappy. He was notoriously unfaithful to her. She had an unattractive personality which does not, however, justify his behavior. As Victor Hugo wrote in his Memoirs:


Mme. de Chateaubriand's benevolence was official, which did not prevent her from being a shrew at home. She founded a hospice--the Marie Therese Infirmary--visited the poor, succored the sick, superintended creches, gave alms and prayed; at the same time she was harsh towards her husband, her relatives, her friends, and her servants, and was sour-tempered, stern, prudish, and a backbiter. God on high will take these things into account.

She was ugly, pitted with small-pox, had an enormous mouth, little eyes, was insignificant in appearance, and acted the ~grande dame~, although she was rather the wife of a great man than of a great lord. By birth she was only the daughter of a ship-owner of Saint Malo. M. de Chateaubriand feared, detested, and cajoled her.

Chateaubriand, who had been a bit of a free-thinker, experienced a dramatic religious conversion because of death of most of his family at the hands of the Revolution. He described it thus in his Memoirs from Beyond the Grave (Memoirs d'Outre Tombe):


Several of my family fell victims to the Revolution. I learned in July, 1793, that my mother, after having been thrown, at the age of seventy-two, into a dungeon, where she witnessed the death of some of her children, expired at length on a pallet, to which her misfortunes had consigned her. The thoughts of my errors greatly embittered her last days, and on her death-bed she charged one of my sisters to reclaim me to the religion in which I had been educated. My sister Julie communicated my mother's last wish to me. When this letter reached me in my exile, my sister herself was no more; she, too, had sunk beneath the effects of her imprisonment. These two voices, coming as it were from the grave--the dead interpreting the dead--had a powerful effect on me. I became a Christian. I did not, indeed, yield to any great supernatural light; my conviction came from my heart; I wept, I believed.

In 1802 he published The Genius of Christianity which helped to make religion "respectable" again and paved the way for the restoration of the Catholic Church in France in 1804. He found it difficult, however, to change his lifestyle as he had changed his beliefs.

Around this time he first glimpsed Madame Récamier. He said of the brief incident in his Memoirs:


Suddenly Madame Récamier entered wearing a white dress; she sat down in the centre of a blue silk sofa; Madame de Staël remained standing and continued her conversation, in a very lively manner and speaking quite eloquently; I scarcely replied, my eyes fixed on Madame Récamier. I asked myself whether I was viewing a picture of ingenuousness or voluptuousness. I had never imagined anything to equal her and I was more discouraged than ever; my roused admiration turned to annoyance with myself. I think I begged Heaven to age this angel, to reduce her divinity a little, to set less distance between us. When I dreamed of my Sylph, I endowed myself with all the perfections to please her; when I thought of Madame Récamier I lessened her charms to bring her closer to me: it was clear I loved the reality more than the dream. Madame Récamier left and I did not see her again for twelve years.

Many years and many ladies later, he met Juliette again. As Chateaubriand afterwards recalled: "I raised my eyes, and saw my guardian angel at my right hand." (Memoirs from Beyond the Grave) It was the beginning of a lifelong friendship. Some have said that Juliette was Chateaubriand's mistress, but there is no evidence that the romance was ever consummated. They never lived together and retained separate establishments. They would be parted for long periods of time but letter writing in those days was considered an art, and Chateaubriand was an artist par excellence.

To him she was the muse who inspired him, although some historians accuse him of using her initially for political gain. At any rate, by the time he recorded his life story, he had entirely idealized the relationship. "I should be afraid now to profane with aged lips a feeling which is still young in my memory and whose charm increases as life ebbs away. I draw aside my past years to reveal behind them celestial visions, to hear from the depths of the abyss the harmonies of a happier region." (Memoirs from Beyond the Grave)

When they were both very old and both their spouses had passed on, Chateaubriand in his advanced infirmity would still visit Juliette, who was blind. Victor Hugo witnessed one of their final meetings:

M. de Chateaubriand, at the beginning of 1847, was a paralytic; Mme. Récamier was blind. Every day at 3 o'clock M. de Chateaubriand was carried to Mme. Récamier's bedside. It was touching and sad. The woman who could no longer see stretched forth her hands gropingly towards the man who could no longer feel; their hands met. God be praised! Life was dying, but love still lived. (Hugo's Memoirs)

Before he died, as well as his memoirs, Chateaubriand penned the biography of the founder of the Trappists, Vie de Rancé, at the behest of his confessor. Madame Récamier died in 1849, taking with her the last memories of an age of revolution and societal upheaval, but leaving behind a legend of beauty that adorned the tumultuous epoch. 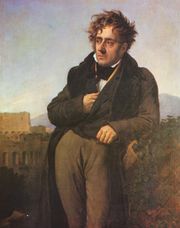 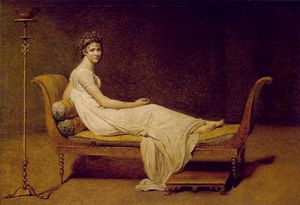