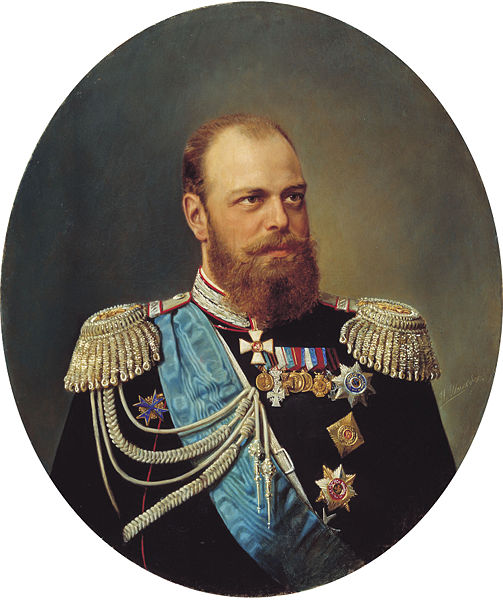 Gareth Russell has a post about his untimely death at age 49 but feel free to add other facts about his life.
http://garethrussellcidevant.blogspot.com/2011/11/november-1st-1894-death-of-tsar.html To quote:


"God, God, what a day! The Lord has called to Him our adored, our dear, our tenderly loved Papa. My head turns, it isn't possible to believe it." - Alexander III's son and successor, Tsar Nicholas II (1894)
Alexander III, forty-nine year-old Emperor of All the Russias for the last thirteen years, had ignored the advice of his doctors concerning his frequent insomnia, headaches and sore legs. They had advised their imperial patient to go and rest at Livadia, the Imperial Family's summer palace by the sea in the beautiful Crimea region in the south. Tsar Alexander, obstreperously distrustful of doctors and adverse to any sign of weakness, insisted upon sticking to the traditional schedule and instead went to Spala, his isolated hunting lodge in Russian-occupied Poland. There, the six-foot-four emperor continued to deteriorate and eventually his wife, the Empress Marie, summoned a medical expert from Vienna, Professor Leyden. The professor's diagnosis was grim and uncompromising. His Imperial Majesty had incurable nephritis, an inflammation of the nephrons of the kidneys, which would eventually prove fatal. Conceding defeat, Alexander left Spala to make the one thousand-mile journey to Livadia.

In many ways, despite the attempts of Russian monarchists and right-wingers to lionise him after his death, Alexander III was a particularly unpleasant individual. Even by the undemanding standards set by Russian society in the nineteenth century, Alexander was viciously anti-Semitic. When reading a government report on some of the horrific examples of violence, persecution and (at best) discrimination faced by his five million Jewish subjects in 1890, the Tsar wrote in the margins, "We must not forget that it was the Jews who crucified our Lord and spilled his precious blood." He was also a harsh martinet of a father to his children, particularly to his eldest son, Nicholas, although he was much more indulgent of the younger two, Michael and Olga. He was gruff in manner, blunt, suspicious, xenophobic and contemptuous of the luxury, trappings and pomp traditionally associated with the Romanov monarchy. Queen Victoria icily remarked of him that he was "a sovereign whom she does not look upon as a gentleman."

Alexander III's three great redeeming features were his self-disciplined commitment to the exhausting duties required of being an absolute monarch (in this he followed in the footsteps of his grandfather, Nicholas I, who proclaimed that the Tsar was the country's first servant); his pursuit of the the injection of capital into the Russian economy and his fidelity to his Danish wife, Marie Feodorovna. It was Marie (born Princess Dagmar of Denmark, but like most foreign princesses who married into the Romanov clan, she took a Russian name when she converted to Orthodoxy prior to her marriage) who now took charge of her husband's care. Forty-seven years-old, slim, with dark hair and dark eyes, Empress Marie was the acknowledged leader of Saint Petersburg high society, but she was also a devoted and affectionate wife and mother. The couple were joined at Livadia by many of their relatives and by four of their five children - twenty-six year-old Nicholas, the heir to the throne; nineteen year-old Grand Duchess Xenia, sixteen year-old Grand Duke Michael and twelve year-old Grand Duchess Olga. Alexander and Marie's second son, Grand Duke George, a twenty-three year-old prince who had inherited his mother's good looks and charm, could not join them since he was suffering from acute bronchitis.

The Empress's care for her husband, coupled with the warm breeze of the Black Sea and the clean air of the Crimea, seemed to bring about a temporary lift in Alexander III's health. He recovered his appetite, went for walks and napped in the sunshine. Defying his doctors once again, he even persuaded his youngest daughter, Olga, to smuggle him in some ice cream for dessert - "Baby dear, I know there is some ice cream in the next room. Bring it here - but make sure nobody sees you." However, within a week, Alexander was once again plagued by insomnia and aching pains in his legs. Despite the best efforts of the Empress and the doctors, the Tsar began to waste away.

In the midst of this family tragedy, Alexander's future daughter-in-law, Princess Alix of Hesse and by Rhine, arrived by train from Berlin. Statuesque and beautiful at this stage in her life, Alix was the favourite grandchild of Queen Victoria and at the age of twenty-two, she had already rejected a proposal of marriage from the heir to the British throne and lobbied hard to persuade her grandmother to allow her to marry the heir to Russia's. Alix's elder sister, Elisabeth (known as 'Ella' in the family), had already married into the Russian Imperial dynasty years earlier, when she married Alexander III's younger brother, Grand Duke Sergei, and it was she who tried to prepare Alix for the reality of life as Russian royalty. Ella joined Alix's train as it passed through Warsaw and the two sisters journeyed through Poland and the Ukraine together. As the fiancee of the future Tsar and the wife of a Grand Duke, there should have been a special private train waiting for the two women as soon as they passed into Russian territory, but the Grand Marshal of the Imperial Court, Count Vorontzov-Dashkov, was so preoccupied with the business of the Emperor's health that he had quite simply forgotten to make the necessary rearrangements. As a result Alix and Ella traveled south to Crimea in ordinary train carriages, surrounded by members of the Russian public, most of whom failed to recognise the glamorous Grand Duchess or the young woman who would one day be their empress.

Four hours away from the palace, Alix and Ella dismounted from the train in the town of Simferopol. In order to preserve the southern Crimea's unspoiled beauty, Alexander III had taken the decision to ban railways from entering it. From this point on, they would travel in a more traditional and environmentally-friendly horse and carriage. The two sisters were greeted at the train station by Nicholas who, despite his grief, was ecstatic to be reunited with Alix once again: "My God, what joy to meet her in my country and to have her near. Half my fears and sadness have disappeared." After a long carriage ride through the gorgeous but sweltering Crimean countryside, Nicholas, Alix and Ella arrived at Livadia, where the Emperor and Empress were waiting to greet them. Insisting that the only proper way to meet a future tsarina was in full, military dress uniform, the Tsar had defiantly dressed in his best, with every medal, decoration and ribbon in its rightful place. However, as Alix approached and knelt before him, she must have been aware that it was a matter of days, at most a few weeks, before her future husband assumed the awesome responsibility of leading the Russian Empire. As he spoke with the girl he had never been entirely sure his son should marry, Alexander was struggling for each and every breath and the difference between the giant who could bend silver forks with his bare hands and the shivering wreck he had become was painfully obvious for all to see.

Speaking very little Russian and embarrassed by her French, Alix (who took the name Alexandra when she converted to Russian Orthodoxy later that year) now felt sidelined from events. Apart from Nicholas, who occasionally went for walks with her in the palace's gardens or along the seashore, the only member of the Imperial Family to bother speaking to her was her sister, Ella. Many biographers have commented with sympathy on the frustration and loneliness Alix felt at being so isolated in a strange but stressful environment, but it is surely natural that in a situation like the one she stepped into in 1894, all attention should be focused on the political implications of the Emperor's impending death and on liaising with his wife, the Empress. Alix, however, quick to pick-up on insults (whether real or imagined), did not quite see things this way and she was incensed that everything was revolving around Marie, rather than Nicholas. After all, Nicholas was soon going to be Tsar and he should be treated as such. He had been sidelined for too long. Increasingly irked by how everyone was bypassing him to go straight to the Empress, Alix took to writing Nicholas little notes in his diary, advising, "Be firm and make the doctors come to you every day and tell you how they find him ... so that you are always the first to know. Don't let others be put first and you left out." Nicholas, to his credit, realised that attempting to assert precedence over his mother at such a time would have been unforgivably tactless. He continued to allow the doctors to give their reports to Marie first and she would then relay them to the rest of the Imperial Family.

Ten days after the Hesse sisters arrived at Livadia, at half-past two in the afternoon, Father John, a well-known priest from Saint Petersburg, gave Alexander III the Last Rites. His breathing had become so difficult earlier in the day that the doctors had given him oxygen, as the Empress summoned the priests. The Tsar lasted another hour or so, surrounded by members of his family and household. Writing in his diary later, Nicholas recalled, "All day we rested upstairs with him. His respiration became difficult, suddenly it became necessary to give him oxygen. About 2:30 he received extreme unction; soon light trembling began and the end followed quickly. Father John remained with him an hour at the bedside, holding his handing." Shortly after the three o'clock afternoon bell, Alexander began to pray. He then kissed his wife goodbye, shuddered and passed away. Empress Marie, hysterical with grief, fainted into the arms of Alix, who was standing behind her.

An article about his wife, Empress Maria, from my now-defunct Sword and Sea.

With her Scandinavian sympathies, Maria was also a strong supporter of the autonomous duchy of Finland, ruled by the Tsars since 1809. In turn, she was greatly loved by the Finns. In his memoirs, Finland's Marshal Mannerheim, when discussing his years in the Chevalier Guards (whose Colonel-in-Chief was Empress Maria), recalled:

...The Empress, daughter of Christian IX of Denmark, had always shown great interest in Finland, and was by us Finns affectionately called Princess Dagmar, the Scandinavian name by which she was known as a girl. On several occasions in the 1920's when I passed through Copenhagen where the Empress spent the last years of her life, I had the opportunity to offer my former Colonel-in-Chief my homage...

Sorry, I forgot the link:

A picture of Maria:

Thank you, M. You did some wonderful posts about the Russian Imperial Family. Feel free to put them here if you have time.

Perhaps I will start a thread on the children of Nicholas II.