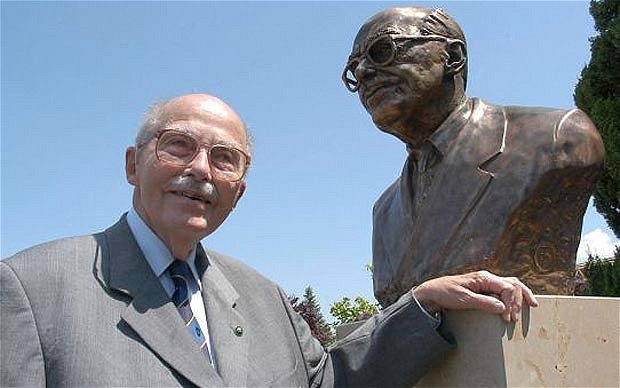 Within that neatly closed circle lay all the major political dramas of the 20th century, most of which he witnessed and some of which he influenced. He was centre stage for one of them — the unequal struggle against Hitler for the survival of his Austrian homeland, which he tried to conduct as an exiled Pretender in the 1930s. Not for nothing did the Führer call the triumphant march-in of March 12 1938 “Operation Otto”.

All that seemed unimaginable to the world in which young Otto, as he was known, started life during the deceptively tranquil Indian summer of the 650-year-old Habsburg monarchy. He was born third in line to the throne on November 12 1912 in the small Vienna palace of Hetzendorf and christened with a string of names demonstrating that the blood of all the Roman Catholic royal families of Europe flowed in his veins: Franz Josef Otto Robert Maria Anton Karl Max Heinrich Sixtus Xavier Felix Renatus Ludwig Gaetan Pius Ignatius.

His father, the Archduke Karl, was a great-nephew of the ruling Emperor Franz Josef, and was then serving as an infantry major-commander at the regimental barracks in the capital. His mother was the former Princess Zita of Bourbon-Parma, and their marriage the year before had been that rare event in a dynasty plagued with so many matrimonial mishaps and misalliances — a happy union of two people perfectly matched in attractiveness, temperament and lineage. Their firstborn was to follow the prescription almost to the letter in his own marriage 38 years later.

At the time of his birth, the 11-nation monarchy still seemed safe, if somewhat wobbly, and his own time at its helm still fairly distant. One Viennese newspaper hailed the newborn prince as the future monarch who “according to the human calculations, will be called upon to steer the future of Europe in the last quarter of the 20th century”.

The assassination at Sarajevo on June 28 1914 of the heir apparent, Archduke Franz Ferdinand, alongside his morganatic wife, put a brusque end to all such calculations. Indeed, the First World War which broke out six weeks later was to spell the doom of Europe’s continental empires, that of the Habsburgs included.

Half way through the war, in the early hours of November 22 1916, the old emperor Franz Josef, who had ruled for a record-breaking 68 years, died at last.

An era, as well as a reign, was over, but the succession was smooth. Otto’s father automatically became the new emperor, and he, aged four, the new Crown Prince. His first ceremonial appearance came on November 30 1916 when he walked, a tiny figure in a white fur-trimmed tunic, between his parents behind the hearse of the late ruler at the great funeral procession in the capital.

A month later he was greeted with wild enthusiasm by the monarchy’s Magyar subjects when his father was crowned in Budapest as the new King of Hungary. The official photograph shows the young boy, dressed in ermine and velvet with a great white feather in his cap, sitting between his parents in their ornate coronation robes.

He always retained vague memories of those events, but these became much sharper when, two years later, the monarchy collapsed under the combined pressure of domestic upheaval and defeat on the battlefield.

The beginning of November 1918 saw him and his siblings stranded in a royal shooting lodge near Budapest, where an armed revolution had broken out. They were rescued by one of their Bourbon uncles, Prince René, who smuggled them across the border to rejoin their parents in the Schonbrunn Palace of Vienna. Otto had a child’s eye view of the collapse of the monarchy, abandoned by the aristocracy it had created.

On November 11 1918 the Emperor Karl, though not formally abdicating, “renounced participation in the affairs of state”. That same night they fled the deserted palace, heading at first for Eckartsau, their privately owned shooting lodge 40 miles north-east of the capital.

The winter there passed fairly calmly, but by the spring their tiny self-styled “court” was under threat from Left-wing agitators. (Austria had promptly declared itself a Republic after their flight from Vienna.)

Their rescuer now was not a family member but a British Army officer — Lieutenant-Colonel Edward Strutt, dispatched on the personal authority of King George V with orders to escort the beleaguered Austrian emperor and his family to safety. This Strutt accomplished in some style, reassembling their royal train for the journey into Switzerland on March 25 1919. Otto never forgot the experience. Whenever he heard in later life complaints about British indifference to the Habsburgs’ fate he would reply: “Yes, but there was always Strutt.”

The two and a half years of their Swiss exile were marked by the two attempts of the ex-Emperor to regain his Hungarian crown. Both were blocked in Budapest by Miklos Horthy, who had now ensconced himself in power as Regent. After the ignominious failure of the second restoration bid the family were exiled by the allied powers to Madeira, where Karl died, a broken man, on April 1 1922. That same day the nine-year-old Otto heard himself addressed as “Your Majesty” by the tiny household-in-exile. To the end of his days he remembered the shock it gave him: “Now it was my turn.”

Under the protection of their kinsman, King Alfonso XIII of Spain, the family moved to Lequeitio on the Spanish Basque coast. Otto remembered the seven years they spent there as their most tranquil time of exile. They were also, for him, the most hardworking. Under the strict supervision of his mother he took, under various tutors, the Matura (roughly, English A-levels) in both German and Hungarian. His further education was also the motive for their next move — to the gloomy castle of Hams at Steenokkerzeel, in Belgium, so that Otto could take his degree at the nearby university of Louvain. It was at Hams that Otto reached his 18th birthday and was duly declared, in a family ceremony with few outside guests, “in his own right sovereign and head of the house”.

However ghostly that title appeared, it was enough to impress the Austrian-born Adolf Hitler, who was manoeuvring to seize power in Germany. When in the winter of 1931-32 the young Pretender spent a few months studying in Berlin Hitler twice suggested a meeting.

The first invitation came from Prince August Wilhelm of Prussia, the dim-witted Nazi son of the exiled Kaiser, and the second via Goering himself. Otto refused both times on the spurious excuse that he had not come to Berlin to discuss politics (in fact, he was doing nothing but). Hitler was incensed by the snub and it touched off a six-year battle between the two men for the fate of their Austrian homeland.

The climax was reached in February and March of 1938 when a Nazi takeover in Vienna seemed imminent, prompting a short-lived show of defiance from the Austrian Chancellor Kurt Schuschnigg — a monarchist at heart but without the strength of his convictions. His vacillation prompted a remarkably courageous offer from the young Pretender to return from exile to take over the reins of government in order to repel Hitler. Schuschnigg dithered but eventually rejected the idea — perhaps just as well for Otto, who was already high on the Gestapo’s wanted list.

He had moved close to the top of that list by the time, two years after the Anschluss, that German armies swept into France and Belgium. The exiled Habsburgs got away from Hams only a few hours before Goering’s bombers attacked the castle, and then they joined the vast stream of refugees heading south. They eventually reached Lisbon, where they were still being hounded by the Gestapo. President Roosevelt (whom Otto had met in Washington just before the fall of France) then honoured his offer of “hospitality in an emergency” and they were all flown by Clipper seaplane to the United States.

As Otto von Habsburg later admitted, he wasted far too much energy during those wartime years in America on the faction-fighting among Austrian refugee groups instead of concentrating on the broader political picture. But, thanks largely to his personal ties with the President, he was able to repair the image of Austria so tarnished by its supine surrender to Hitler in the Anschluss. And, in the last months of the war, he worked closely with the White House in the vain attempt to lure Horthyite Hungary over to the Allied side.

Churchill, whom he met at the Quebec Conference, warmly supported the vision of a post-war conservative federation in Central Europe. Stalin put paid to those visions, however, and it was to a Communist-controlled Danube Basin that Otto returned in the spring of 1945.

He made a brief foray into Western Austria but was expelled by the reborn Austrian Republic, which had reaffirmed the anti-Habsburg legislation of 1919. He then faced a personal crisis — without a valid passport, a home or any regular income. He solved the last problem by embarking on a career as a journalist and public lecturer. This was exhausting but highly remunerative and, within five years, he had paid off all his wartime debts and was enjoying a comfortable income.

He could now think of finding a home and founding a family. The ideal partner appeared by chance in 1950, when he visited a refugee centre near Munich. Working there as a nurse was Princess Regina of Sachsen-Meiningen, herself a refugee whose father, Duke George III, had died in a Soviet concentration camp. The ideally-matched couple were married a year later and settled in a comfortable villa at Pocking, near Lake Starnberg in Bavaria. Their first five children were all girls, and it was not until 1961 that the birth of Karl Thomas, the first of two sons, assured the line of direct succession.

This prompted Otto to renounce his own dynastic claims and pursue what had long fascinated him, a full-time career in politics. He acquired dual German-Austrian nationality, and in 1979 was elected to the European Parliament as Christian Democrat member for North Bavaria. There he stayed for the next 20 years, becoming the highly regarded Father of the House and its only member to have been born before the First World War.

He proved an accomplished debater with a fluent command of seven European languages. Though he spoke on a variety of topics, his abiding theme was the need to bridge the East-West division of the continent and ultimately to bring all the nations of the old monarchy within the new European Union. He continued to work successfully at this even after his retirement, using the pan-European movement as his principal platform. He had been the president ever since the death of its founder, Count Coudenhove-Kalergi, in 1972.