History is written by the...extroverts?

History is written by the...extroverts?

Caroline Weber's Queen of Fashion: What Marie-Antoinette Wore to the Revolution raises an interesting point for discussion: Just how frivolous was Antoinette in her party days?

Weber contends that Antoinette’s parties early in her reign were less due to her being a vapid party-girl who didn’t know any better and were actually a power play. Antoinette threw extravagant fetes to give herself a semblance of power and authority over Louis XVI, buffering her power and consolidating her position. At first, I wanted to wave the idea away. What value could be gained from partying?

Well, a few of Antoinette's contemporaries, if members of her opposition, would have giggled at my naivete. After all, Marat could track down a mob imported to lynch him and invite them out for a beer - one beer later, nobody was lynching Marat. What happened over that bottle? What happened during that party? Robespierre would certainly wonder. After all, he never stopped carping - correctly - that the Girondin gatherings were hotbeds for political intrigue. In fact, he thought the method worked so well that he threw some himself: the famous Jacobin fetes. Like Antoinette's gatherings, these were initially waved aside as fruits of Robespierre's frivolous idealism, but later some inquisitive historians like John Hardman synchronized the dates and noticed, golly lolly, Robespierre seems to schedule a Jacobin fete just when providentials are coming to visit! Just before it's time to make a day of it, like just before we march onto the Tuileries!

Wow, what a staggering coincidence! Ho ho ho, ain't no party like a Jacobin Party, and it ain't a Jacobin Party unless you overthrow the entrenched regime and establish a Reign of Terror.

These little events are rarely discussed in our history books and when they are it's usually with derision. Ew, Antoinette's so frivolous, look at her wasting all her time playing when she should have been trying to gain leverage for her position in court!

Why are the two treated as mutually exclusive?

I think the reasons for this underestimation are dual pronged.

One: Whoever the victor is, history is written by the introverts. Look, whether WWII was won by the Allies or the Axis, it was going to be a bookworm who scribbled the history texts. And bookworms...tend to not be people with a particular affinity for partying. They treat it with derision because they don't understand it. But partying isn't necessarily frivolous fun. Get your buddies in a room! Get everyone's heads swimming! Watch for offhand comments! Who's in this to win it, who's loyal, who's waffling? Introduce the right people to other right people before they meet the wrong people! It's networking gold, it is important, but this nuance is missed because many authors are comparatively unaware of these advantages.

And Two: Parties are areas where domination is shared by men and women. C'mon, Danton doesn't want to go to your party, Tallien, unless you have some chicks there. If men can use parties to push a political agenda women can too --- and we don't want to give women credit for ever doing anything, so these gatherings are necessarily watered down into nothing.

Let's not. If we allow that the Revolutionaries of every size, shape, and hue liked to construct tangible political engines during a "frivolous" party, that Marat was doing more than drinking beer, that the Girondins were doing more than playing the piano, and that Robespierre was doing more than hailing virtue... why not Antoinette? At the same time, just because one person is using a party for political gains doesn't mean another is doing the same.

So what do we think Antoinette was doing with her parties? Was she just being frivolous? Or was she trying to consolidate her precarious position?

I agree with Dr. Weber on this point. I think the Queen's parties, like her clothes, were power plays. Women have always used clothes and entertainments as political tools. Marie-Antoinette was sent to France to seal a shaky alliance. She had to prove that she was someone to contend with at the French court by establishing in everyone's mind the assumption that she could influence the King. She knew that the powerful women had always been the mistresses, so she had to prove, through clothes and parties, that she was her husband's mistress as well as his wife.
_________________
Je pardonne à tous mes ennemis le mal qu’ils m’ont fait.

Bunnies wrote:Caroline Weber's Queen of Fashion: What Marie-Antoinette Wore to the Revolution raises an interesting point for discussion: Just how frivolous was Antoinette in her party days?

A bit of off topic comes, but it was my first association after reading the topic title. If you search on the internet, you can see how deeply Coppolas Marie-Antoinette is rooted in today's pop culture. If you see, for example, Anna Amber's tumblr posts, an average painting/postcard/quote about the "real" Antoinette is reblogged remarkably less times than Coppolas... khm... "Marie". (There was a Kirsten Dunst citation on another tumblr, where she discussed how she got to know better the figure she played, and she called her "Marie". Sorry to be vulgar, but WTF?! How could she get to know someone without recognizing the NAME she used?!

The visitors of this forum may have read here before why I dislike that film. Briefly: the partygirl Antoinette shown there offers no other interpretation of history than "Those idiot aristocrats ate cookies and drank champagne while poors were starving!". Of couse, no one debates that the French system was extremely unjust, but Louis XVI also struggled with reforming it, and not just sat somewhere, saying, "Ha-ha, I'm the king, who cares about peasants?". Antoinette's parties and clothes were considered in her age (!) as frivolous, but if she had done the same as in the Coppola film (smoking, being totally drunk, having wild orgies), she would have been kicked out from the court. Other nobles (men and probably some ladies) might have done the same, but they weren't as important and symbolic figures as the Queen. So, even if the system was bad and L&A weren't good enough in politics to change it, no one can say today that they were the bad guys who were totally indifferent/evil/the creators of everything unfair in the land. And with Coppola's film, many people think this. I mean, mixing a political situation with the personal level of this story is a trap that the filmmakers couldn't avoid.

This is why I find a balanced view extremely important. Of course, a noname peasant woman who had 10 children and all of them starved is the real victim of the pre-revolution era, not the royals who had everything and even the chance to reform the state, an opportunity which they couldn't take in the end. But the real Antoinette was a woman who went spending her money and gambling, had 18th century "boring" parties and tried to help the poor at the same time. Pop culture Antoinette is a wild party girl who had 21th century parties and didn't even try to understand what's happening in France. I'm sometimes accused in Facebook groups and discussions why I don't like the pop cultural reception on Antoinette. Well, maybe therefore? (When a magazine writes "Madonna dressed as Marie-Antoinette", my blood pressure becomes high and I wanna shout "Madonna dressed as a 18th century average rich party woman, which is NOT synonyme with Marie-Antoinette's being!!!!" 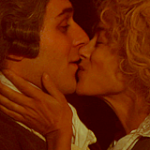 Oh, dear Sophie! I personally can't stand the Coppola film and you notice I never put any pictures from it on my blog. I know that many of my young friends like it, even though they know and have publicly explained how inaccurate it is. I think our young bloggers like to show the pop culture interpretation of the Queen as a sort of modern phenomenon.

And yes, Louis and Antoinette both tried to reform both the government and the court along enlightenment principles. But they were dealing with enemies on the inside, people who would stop at nothing. They were able to hold things together for much longer than their enemies wanted. Nesta Webster says that they were supposed to have been murdered on Oct 5-6, 1789 but the fact is they used their wits to survive another four years.

I've just realized that I consequently wrote "Coppolas" instead of "Coppola's"...

Maybe Antoinette whispered it to my ears in her lovely Austrian German, or languages simply wrestle with each other in my head?

Anyway, if we forget this pop cultural stuff and focus on historical facts itself, I find the theory about using parties and any kinds of social events as a political weapon quite useful. It explains among others, why Antoinette's political enemies (even those who also never lived ascetic, like Philippe d'Orléans) blamed her for her parties and clothes. Another little detail came into my mind while reading the Charles Duke Yonge biography last summer. The author says, the gambling room was the only place at the French court where everyone was considered equal. Nobles could talk to the king and queen, they were allowed to sat down next to them, and to be relaxed without ceremony in general. Nothing mattered, no social ranking, no etiquette, just winning and losing in Fortuna's hands.

...our dear Antoinette's well-known gambling addiction was simply a hunger for real social contacts? Not as Queen of France, but as a human? She didn't have a single minute for her own (at the beginning, not in the later Trianon period). She never knew if her friends are real ones (see her disappointment in Provence). Etiquette and gossip even held her back to get to know her own husband, who also went gambling sometimes. So, I can easily understand that gambling parties and visiting of the opera were the only chances for her to live as a normal human for a while, not as an icon of the French monarchy. The Coppola film, showing her as a bored girl being often alone, is clearly missing this important point. (I should stop mocking this poor woman!

The Queen herself probably never realized this. Louis, with forbading Antoinette to gamble and even to visit the Paris opera, just wanted to recreate the destroyed dignity of the royal family - I also don't think he ever thought about the psychological side, etiquette was for them natural, even if they disliked it. But after Antoinette became the Queen, matured, had true friends, children and her spare time in Trianon, she seemingly didn't need gambling parties anymore. Coincidence?

My dear Sophie, this is a brilliant analysis! I think you are on to something!