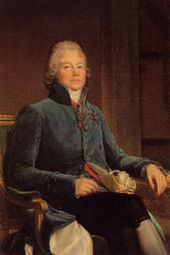 From Tea at Trianon:
http://teaattrianon.blogspot.com/2007/02/talleyrand.html

As students of the French Revolution know, Talleyrand (1754-1838) is someone who will not go away. He keeps turning up again, always at the top of every new regime. For those who have read Madame Royale, in case you were wondering, yes, Talleyrand was reconciled to the Church before he died. A bishop who helped sign the Church in France over to the Revolutionary government, as well as a notorious philanderer, Talleyrand's was no doubt a conversion wrought by many, many prayers, probably the prayers of the monks and nuns whom he would discreetly help. In spite of his involvement in the Revolution, he continued to make donations to pious and deserving religious houses throughout his life. He was also perhaps the most brilliant diplomat who ever lived; his machinations on behalf of France at the Congress of Vienna spared his people a great deal of extra grief.

Talleyrand had not wanted to become a priest; his family pressured him into it, since because of his limp he would never be able to ride or dance in the manner becoming a courtier. Talleyrand said, "I will make them regret that they ordained me, " and that was one promise he kept. He was not able to keep his marriage vows any better than he had kept his clerical vows. He married his mistress the actress Catherine Grand in a civil ceremony because Napoleon insisted on a veneer of respectability. He remained attached to the lifestyle of the old regime in spite of his revolutionary involvement and he missed the courtly ways. Whatever else can be said for him, his manners were unfailingly gracious; he remained an aristocrat of a bygone era.

His great love was no doubt the wife of his nephew, Dorothea of Courland, the Duchess of Dino. She lived in his house for many years, although there is no solid proof that he fathered one of her children. It was teaching his little nieces and nephews their prayers that led to his reversion to the faith. He was not completely reconciled to the Church until his deathbed though, and then he corrected the priest who was administering extreme unction, as the minister was about to anoint the palms of his hands. "Remember, I am a bishop," Talleyrand reminded, and the priest anointed the backs of his hands. He was sincerely mourned by the people of France who knew that, politically at least, he had worked for their benefit.

He visited this country. There is a small town in Central Pennsylvania about 20 minutes outside of State College known as Bellefont whose citizens pride themselves on the fact that Tallyrand visited there.

Yes, rumor has it that he fled to Bellefonte after being hounded out of Philadelphia for publicly escorting a lady of color down the street.