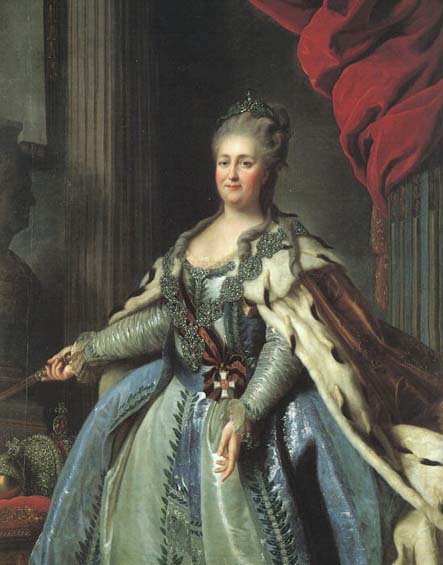 (From Tea at Trianon) http://teaattrianon.blogspot.com/2008/03/catherine-great.html

When surfing the internet for facts about Empress Catherine II (1729-1796), it is almost impossible to find a biographical account which does not include the most lurid sensationalism. Some of it is so stupid and baseless that it should not be mentioned at all. Is sordid nonsense all that people want to read about? Of all the immense political and cultural accomplishments of a highly successful reign, it is the private life of Catherine the Great (especially imaginary aspects of it) that is focused upon. No, she was not a woman of high virtue. Yes, she did have a series of lovers throughout her long life. There was clearly a serious emotional and spiritual void that sought fulfillment in serial boyfriends. How very sad.

In spite of various glaring human failings, Catherine was a magnificent ruler. Born a German Lutheran of a minor princely family, she was sent to marry the heir of the Russian throne almost as a fluke. Peter was such a mess that they would not have dared try to marry him to the daughter of a major European monarch. While Catherine found Peter impossible to love, she undoubtedly fell passionately in love with Russia. She embraced the Russian language, culture, people and religion. She studied incessantly and was probably among the most highly educated women of her time. In the course of her reign, she imposed order upon the land, abolishing many cruel and inhumane customs.

With her knowledge and appreciation of French culture, she brought some finesse to the Russian court, at least as outward appearances go. In the early part of her reign, she tried to be a liberal, but after being shocked by the horrors of the French Revolution she became more reactionary. She established schools and museums as well as being responsible for many greatly needed civic improvements. She also granted asylum to the Jesuits, who had been temporarily disbanded by the Pope.

According to one article (http://nevermore.tripod.com/Cgreat7.htm):


Catherine possessed majesty without being pompous. She was neither cold nor inhuman. Over the years she lived through hurtful criticism, rebellion, war and estrangement from her son, whom she thought incapable of ruling Russia. She was a woman alone without her own family, except her beloved grandchildren. Although she had a deep love for her adopted country, it is entirely conceivable that at times she must have felt a certain longing for the place where once her cradle stood. She suppressed it, to be sure, because of her elevated position. But we see that she often refers to her former governess Babette Cardel, whom she had loved and from whom she learned much in her sheltered childhood. We can also read how devastated she was when as Grand Duchess she had learned of the death of her beloved father. One wonders how much guilt she must have felt at that time, because she had gone against her father's wishes and changed her religion. As Empress, she showered her grandsons with much love, but one senses a void she tried to fill with the many relationships she formed with men. Perhaps we misunderstand her many attachments. We realize that she craved affection. It is lonely at the top, but Catherine loved to teach and she had much to give. We can see from her many letters to Baron von Grimm, that she took pride in the education of her young protégés. Perhaps what many biographers interpreted as promiscuous behavior, was nothing more than her filling the lonely hours by sharing her vast intellect with the young men she deemed worthy of her attention. Not all of them, only some. This seems possible especially in her later years. We read that she was hurt by the actions of some of her young friends. We also see that she supported them when she found out they had formed attachments elsewhere and when they wished to marry the lady of their choosing. Her behavior at such times is not that of a woman scorned. She had long and lasting relationships with Orlov and Potemkin, and it seems that she was capable of faithfulness. There is no doubt that Catherine's reputation suffered because of the many accounts of her affairs. Perhaps we should put these attachments into the proper context. In the overall picture, all these stories about Catherine the woman cannot diminish her many achievements as Catherine the Empress.

Among the more interesting depictions of Catherine in drama and film are George Bernard Shaw's Great Catherine, later made into a film with Peter O'Toole, and The Scarlet Empress starring Marlene Dietrich. Both are outrageously entertaining without being morbid. Among biographies of the Empress, I would recommend that of Zoe Oldenbourg.

Robert K. Massie, author of Nicholas & Alexandra and Peter the Great, has a new biography due to be out on Catherine. It's his 1st book in some years.

Has anyone else read John T. Alexander's biography on her? It was ok...

I have not heard of either book. Do tell. 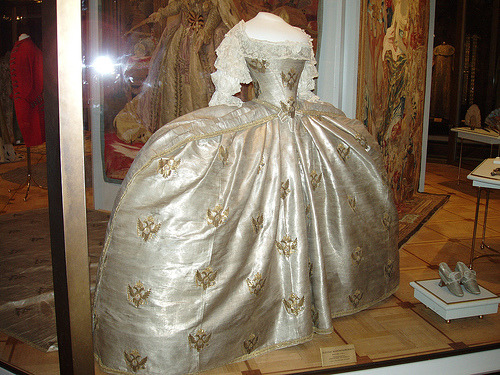 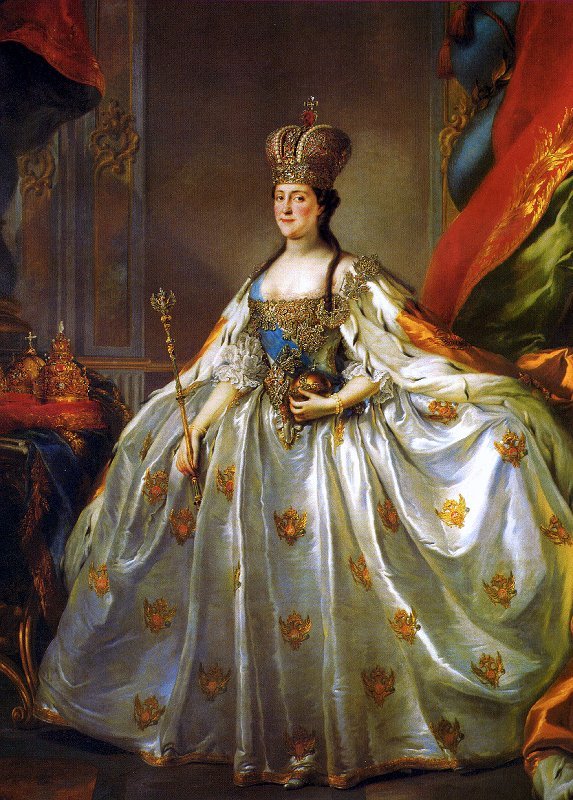 My review of Massie's book:


To tempt, and to be tempted, are things very nearly allied, and, in spite of the finest maxims of morality impressed upon the mind, whenever feeling has anything to do in the matter, no sooner is it excited than we have already gone vastly farther than we are aware of, and I have yet to learn how it is possible to prevent its being excited. ~Catherine II

Empress Catherine II of Russia is the subject of Robert K. Massie's recent stellar biography. Taking control of her own destiny, Catherine the Great oversaw the building of palaces, universities, cities and towns as the sole ruler of the largest country in Europe. The Empress began the first state-sponsored university for women in Europe. She wrote a books of laws and called the first ever Russian legislative assembly. Traveling all over her empire as she expanded the boundaries through wars of conquest, Catherine did everything on a vast scale; she should be a heroine to feminists. Catherine had at least twelve love affairs. One would think she would have a broader appeal among contemporary young women than poor, doomed Marie-Antoinette, but that has not been my impression. However, I think that often, in movies, films and novels, elements from Catherine's life are lifted and patched onto Marie-Antoinette, including the husband with a phimosis, and a dashing foreign lover. (In Catherine's story his name was Poniatowski and he was from Poland.) Furthermore, Catherine actually wrote her own memoirs; she was introspective in a way that Marie-Antoinette was not, and yet so many novels are based upon fictional memoirs or diaries of Marie-Antoinette.

The above quote from her own writings is Catherine II's explanation of why she so easily capitulated to romance. It is hard to understand how a woman who was otherwise disciplined and sensible, who had displayed a will of iron on the international stage, could be so weak when it came to handsome men. She was like a female King Solomon, except that her affairs were consecutive and spread out over a long period of time. She was in love with love, claiming that she could not live a day without love; it is safe to assume that she was addicted to sexual relationships. How Catherine's inclinations came to be formed is analyzed in Massie's solid biography; he carefully pulls the information together in such a way that I felt as if I was finally meeting the real Catherine.

Massie reveals, more than any other biography that I have read, the emotional deprivation experienced by Catherine from her early childhood on, due to the fact that her ambitious and narcissistic mother had wanted her to be a boy. She was the recipient of constant criticism and stringent training which would have broken the spirit of a frailer child. Her family were minor German princelings, but her mother had connections by which she was determined to advance herself and drag Catherine along with her. As a young teenager, Catherine, whose birth name was Sophie, was sent to Russia to marry her cousin Peter, the unwilling heir to the Russian throne. Peter had severe psychological problems which increased with age. The ordeals Catherine went through in Russia at the hands of crazy Peter and his eccentric aunt the Empress Elizabeth amounted to mental torture and at times caused her great physical suffering as well. When Catherine's son Paul was born, the baby was whisked away while Catherine was forgotten, lying alone for hours after childbirth without any care. She thought she would die of thirst. That is just one example of the neglect and thoughtlessness visited upon Catherine as a young person which later contributed to her insatiable hunger for affection, passion and pleasure.

One quality for which Catherine is always praised is her love of the Enlightenment and the writings of the French philosophes. She corresponded with Voltaire as if he were her father, sharing matters of state with him as well as her personal life. She gave financial support to Diderot, bringing him to Russia for a long visit. Catherine tried to harmonize the new liberal philosophies with her role of autocrat; she aimed at mercy, tolerance and just laws and strove to bring culture and education. Sadly, her good intentions often broke down when it came to political realities; she found herself tolerating serfdom when she had wanted to abolish it because she could not risk losing the favor of the nobles. Serfdom in Russia was as bad or worse than slavery in the United States. There were millions of serfs and they could be bought and sold, families divided; they could be beaten, tortured, raped. It was terrible; Catherine knew it was terrible, but the writings of Montesquieu about the rights of man were completely lost on most Russians. During the French Revolution, which horrified Catherine, she banned the works of the philosophes in Russia, even those of her friend Voltaire. She blamed them, not unjustly, for stirring up the class warfare and contempt for religion which erupted into violence, murder and social chaos. The Empress was determined to protect Russia from waves of change which, she was convinced, would only lead to disaster.

Massie's book not only vivifies the complex personality of the Great Catherine, but gives clarity to the exceedingly complex European politics of the eighteenth century. At the beginning of each section the author reviews information spoken of in previous chapters so as to keep the reader from getting lost or confused. It is helpful without being repetitive, and the only way to keep all the names straight. Most of all, Massie gives us a flesh and blood portrait of an all too human leader who, in spite of the sadness and turmoil of her private life, was able to accomplish great things, making Russia a major player in world politics as well as in art and literature.
http://teaattrianon.blogspot.com/2012/12/catherine-great-portrait-of-woman.html
_________________
Je pardonne à tous mes ennemis le mal qu’ils m’ont fait.