As I alluded to in the Joan of Arc thread, I have a fascination with political propaganda. So I thought I'd make a thread for the discussion of Revolutionary and Royalist propaganda throughout the French Revolution. I'm going to share a few outright, in no particular manner of organization: 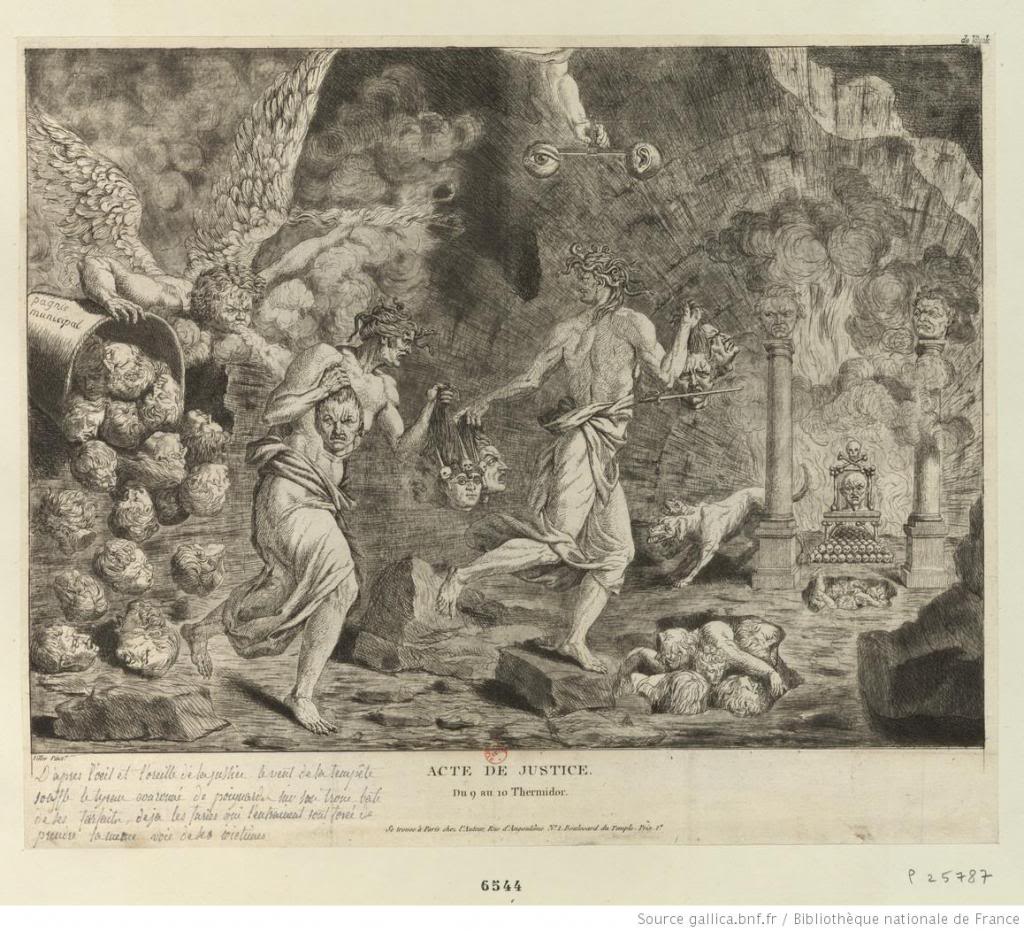 So the Thermidorians have won and banished the Robespierrists to hell. Or at least I'm assuming so, the text is too scrunched for me to even try and read.

The best part of this, of course, is how everyone is disgruntled except for Robespierre 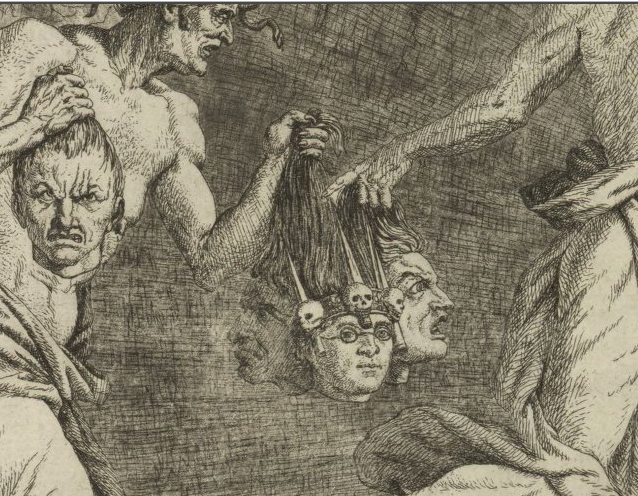 Okay, he's a decapitated head about to be thrown into the eternal fires of hell, but he's gone through worse. He's got this, he ain't even mad. They even let him keep his spectacles and how can you begrudge that? 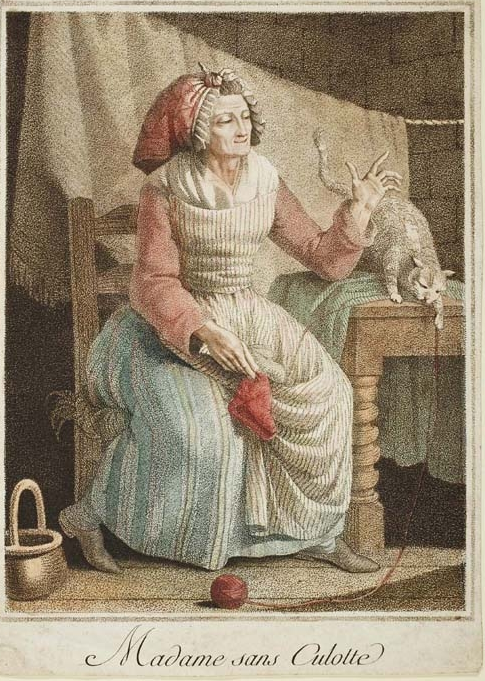 This one is less silly, but I'm sharing it for balance. This is the idealized sans-culotte woman. Notice how she is sewing a red cap of liberty rather than wearing one on her head. Women wearing the red cap was very controversial, but nobody would begrudge a seamstress and its presence in the portrait gets the "liberte, egalite, fraternite" point across anyway. 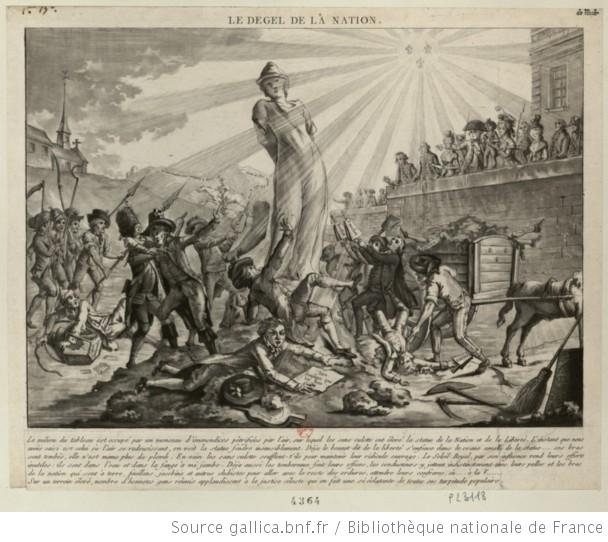 The text might be hard to read, but its translation is: “The moment we have captured is that where, in the softening air, we see the statue melt imperceptibly. Already the bonnet of liberty is sinking into the statue’s softened skull…In vain, the sans-culottes puff and puff to preserve their ridiculous work. The influence of the Royal Sun makes their efforts useless: they are in the water and mire up to their knees. The garbage collectors are already at work…” T-there's a lot going on here, Camille Desmoulins is gripping a lantern in the far corner in reference to his title as the lynching Lantern Attorney, Lafayette has turned into a swan and is escaping to Metz because political cartoons never make any sense, someone is throwing Barnave and Prunhomme out with the trash... 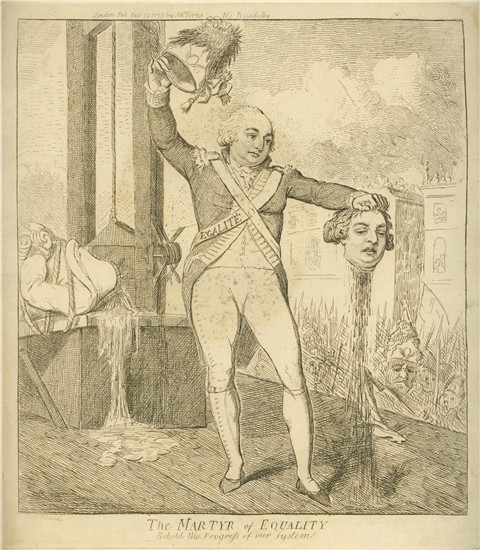 Philippe Egalite, the Duc d'Orleans, holds up Louis XVI's head. "Behold the progress of our system!" My favorite part is the disgusted guard in the crowd, between Louis's torrent of blood and right border. 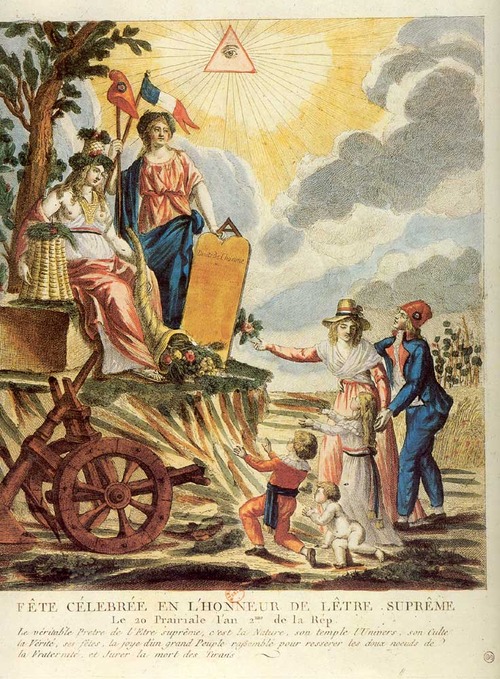 This one almost looks like it might've been commissioned by Maximilien Robespierre himself. The Festival of the Supreme Being is bringing everyone together under the auspices of the justice and reason.

No collection of political propaganda is complete without David, although admittedly his work is a little classier than the other pieces I put up: 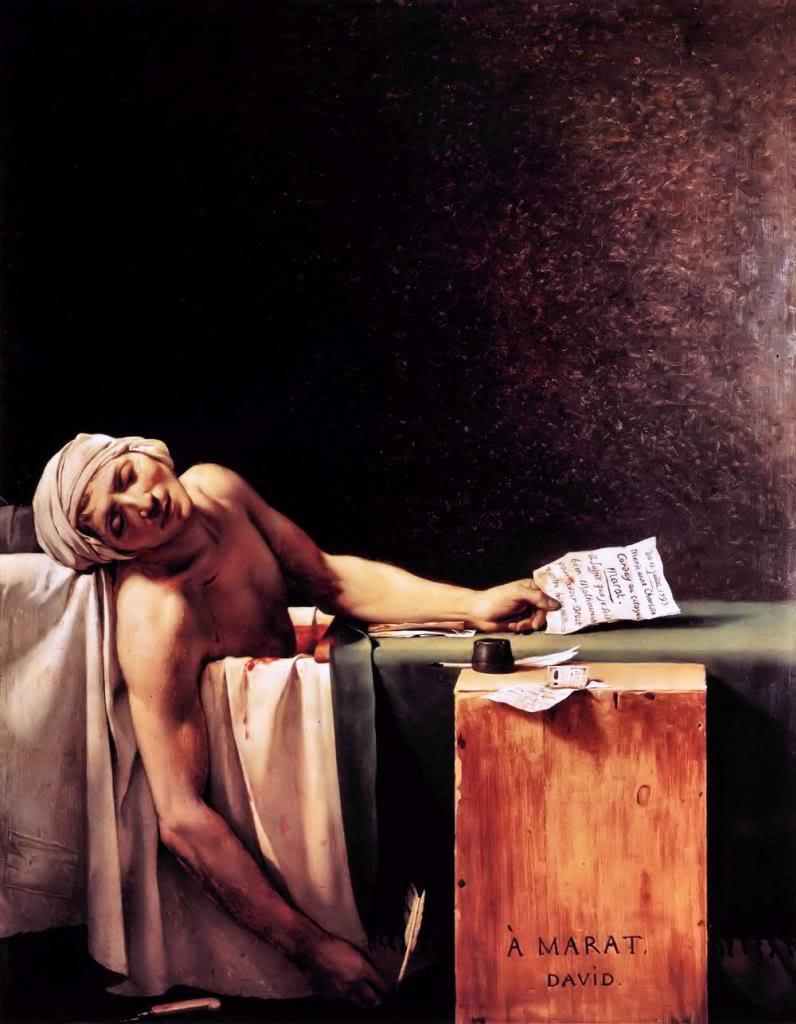 I think everyone knows the story behind it, Charlotte Corday killed Marat, David painted this to show Marat's purity and martyrdom. 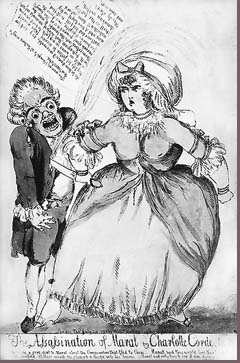 This is my favorite piece of all. In fact, if anyone doesn't like propaganda they're wrong because are you seeing this? And I almost like to think that it was drawn in reaction to seeing David's "Death of Marat." "Oh, those Revolutionaries think they're sooo talented! Well, I'll show them what really happened." 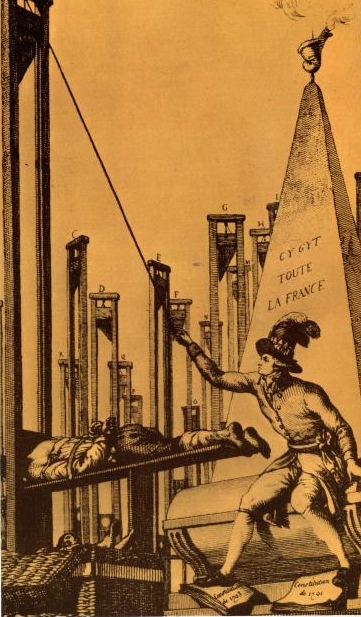 Robespierre's stepping on the Constitution and the Declaration of Rights as he chops off the executioner's head. He got everyone else, you see. 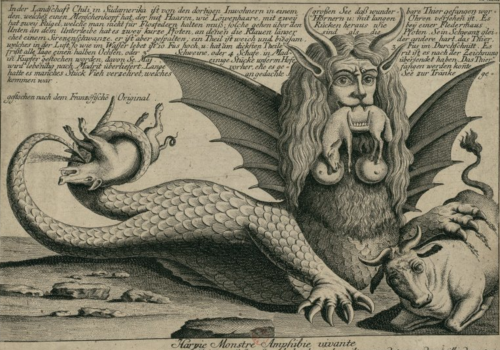 Couldn't find any details on this one, but it looks pretty conventional as far as Anti-Antoinette propaganda goes. She looks pretty pleased with herself, I gotta say.