Tea at Trianon Forum :: Land of the Free 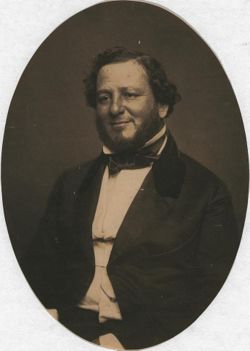 A reader sent me the information about this interesting gentleman and politician. Judah Philip Benjamin was the first person of Jewish descent to be nominated to the U.S. Supreme Court as well as the first to serve in a North American presidential cabinet. He was the second Jew in history to serve as a U.S. Senator. He held several posts in the cabinet of Jefferson Davis, and after the fall of the Confederacy, he had a second career as a barrister in England. He is buried in Paris at the famous Père Lachaise cemetery. According to Wikipedia http://en.wikipedia.org/wiki/Judah_Benjamin:

He quickly gained a reputation as one of the great orators of the Senate, and in 1854 Franklin Pierce offered him nomination to a seat on the Supreme Court, which he declined. He was a noted advocate of the interests of the South, and his most famous exchange on the Senate floor was related to both his religion and the issue of slavery: Benjamin Wade of Ohio accused him of being an "Israelite in Egyptian clothing," and he replied that, "It is true that I am a Jew, and when my ancestors were receiving their Ten Commandments from the immediate Deity, amidst the thundering and lightnings of Mt. Sinai, the ancestors of my opponent were herding swine in the forests of Great Britain."

Benjamin remains an intriguing character who played a part in the shaping of American history. His legacy is summed up thus:


In the final years before the war, Benjamin was widely admired nationally in both Jewish and non Jewish communities for his prestige as a Southern leader and his eloquence as an orator. His election to the U.S. Senate was a watershed for American Jews. Because of the war, he became the first Jewish political figure to be projected into the national consciousness. Jews in the South were especially proud of his achievement because he validated their legitimacy as Southerners. A pivotal figure in American Jewish history, Benjamin broke down the barriers of prejudice to achieve high office. After him, it was more acceptable for Jews to be elected to office and to aspire to service in the councils of national power.

Tea at Trianon Forum :: Land of the Free