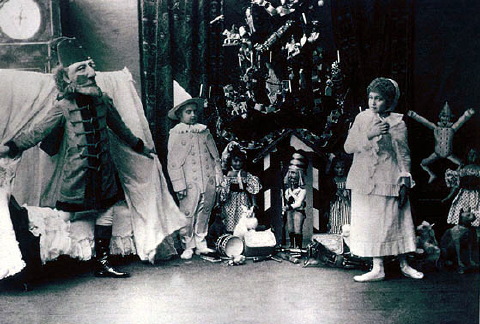 In the hundred years or so since its debut, Tchaikovsky's The Nutcracker has become a delightful aspect of modern Christmas celebrations. Composed during the "Silver Age" of Russian ballet, The Nutcracker is based upon a fairy tale by the German romantic writer E.T.A. Hoffman, whose stories also inspired Delibes' Coppelia and Offenbach's Tales of Hoffman. It is one of the few ballets that is not a love story, although later stagings have tried to make it into one.

The music, however, is powerful enough for any story of a great romance. In college, I helped my sister Andrea, who was still in high school, with a project; we were listening to the "Pas de Deux" of the Sugar Plum Fairy and her cavalier. Andrea said, "That must be from a really great love story."

"No, it's just from The Nutcracker," I replied.

It is a simple story, full of childhood's innocent, but very real, hopes and fears. To watch or listen to The Nutcracker is to enter into a dream, a dream which comes to life even after so many years, and all wars and revolutions which have tormented the world.
_________________
Je pardonne à tous mes ennemis le mal qu’ils m’ont fait.