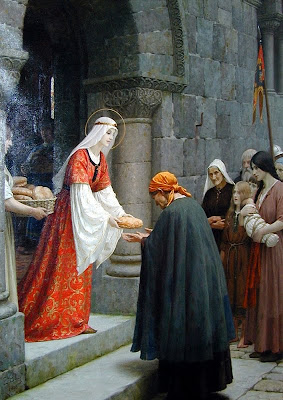 On November 17 the Church gives us the feast of Saint Elizabeth of Hungary (1207-1231) who in her twenty-four years on earth embodied virtues which in today's world have almost ceased to exist: honesty, modesty, courage, chastity, self-denial and fidelity. She was not queen of Hungary, as many people think, but a princess. Her parents were the king and queen. Being royal in those days meant that your life was not your own. Marriages between two ruling families would form an alliance between countries and keep two countries from going to war. So from her infancy, Elizabeth was a living pledge of peace, since she was promised in marriage to the heir of Thuringia.

Elizabeth was sent to Germany at the age of four to be raised in the household of her betrothed, Louis of Thuringia, as was the practice of the time. It was heartbreaking for her parents to separate from their lively, dark-haired little girl, but they commended her to God and Our Lady. Louis' family disliked her, as was often the case with foreign royal brides, but he always cherished and protected his little fiancée. Elizabeth, although far from home, was a Magyar princess, and there was an intensity in her commitment to God and her husband which was repugnant to the placid Thuringians. They were married when Elisabeth was fourteen and Louis was about seventeen; he had inherited the dukedom of Thuringia from his father by then. Thuringia is roughly where Hesse-Darmstadt is now. In the thirteenth century it was a prosperous and powerful territory, although Louis was a duke, not a king.

Elizabeth had always shown a strong inclination toward piety as well as a great love of helping the needy and downtrodden. She opened a hospital for the poor in one of her castles and ran a soup kitchen. She was passionately in love with her husband, which is one of her most appealing aspects - she was a saint but she was also very much a woman. Louis truly loved his wife and sought for a fervent priest to guide her spiritual life. Unfortunately, her later confessor, the overzealous Conrad of Marburg, was excessively harsh with Elizabeth.

As Duchess, she established the Franciscan order in Thuringia and became herself a tertiary (with St. Louis of France, she is the patroness of tertiaries.) . Louis and Elizabeth had three children.

When Elizabeth was twenty, her husband died while on crusade. She ran shrieking through the castle, as if she had lost her mind. Her brother-in-law coveted the inheritance; he evicted Elizabeth and her three small children from their home. He forbade everyone in Thuringia to give them shelter. The little family had to hide in a pig pen from the rain. Poverty, loss and persecution did not embitter Elizabeth, as it would have embittered others, especially when it involved the suffering of her small children. She accepted everything from the hand of God.

Finally, someone got word to Elizabeth's father the King of Hungary, and he prevailed upon the Holy Roman Emperor to intervene. Elizabeth's lands were restored to her but she voluntarily chose holy poverty. After securing her children's welfare, she lived in a small room in the hospital she had founded and cared for the sick and the lepers. That would be like someone going to live with AIDS patients today.

Emperor Frederick begged for Elizabeth's hand in marriage but she refused. She died at the age of twenty-four and as she passed from this world a great light filled the room. Many miraculous cures were reported at her grave site. She was buried wearing the imperial crown which she had refused in life.

Thinking of St Elizabeth can help us when ever we feel afraid of poverty, or of being alone. Her spirit of humility and the renunciation of worldly honors can be imitated by all.
_________________
Je pardonne à tous mes ennemis le mal qu’ils m’ont fait.

The connection between St. Elizabeth and St. Elizabeth of Russuia (Ella of Hesse) is remarkable. Not only was Ella named after this saint (who was her ancestor) but their approach to the poor was almost identical. I have a quotation for Elizabeth of Hungary which I am sure Ella applied in her own life:
"I want to be able to say to Jesus, 'you were hungry and I gave you food; you were naked and I clothed you; sick and I came to you; in prison and I visited you."
Ella did all these things (even visiting her husband's murderer in his prison cell!)

Queen Elisabeth of Belgium was also a descendant and admirer of Elizabeth of Hungary. In her memoirs, Queen Elisabeth's daughter Maria José mentions that her mother gave her Montalembert's biography of St. Elizabeth to read.