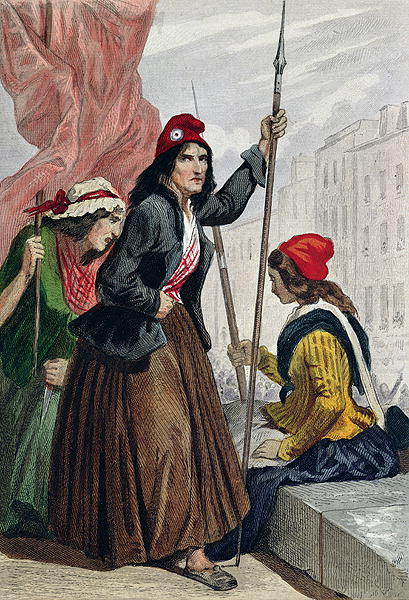 Les Tricoteuses were the women who sat around the guillotine, keeping track of the number of executions with their knitting. They embodied the Terror of the French Revolution, for they seemed to be drawn to the blood and the violence, so consumed were they by hatred. When women are out for blood, they can be more ruthless than men, and far more cruel. Most of les tricoteuses, "the knitters," were simple and ignorant women, manipulated both by their own passions and by the leaders of the various factions. The manipulation was facilitated by famine, war and social chaos, all of which spiraled out of control amid the violence of the Revolution.

Les tricoteuses took part in the great massacres of the Revolution, such as when the mob attacked the Tuileries in August 1792, and during the slaughter of the following September. They were instrumental in storming the palaces and terrorizing the royal family. The were used by the new power elite. It is a sad but thought-provoking example of how low women can go when reduced by circumstances as well as by rage and hatred. The nastiness of les tricoteuses make those like Louis XVI, Marie-Antoinette, Madame Elisabeth, and many others from all walks of life, who behaved with courage, dignity, and courtesy throughout every outrage, shine like lights in the darkness.
_________________
Je pardonne à tous mes ennemis le mal qu’ils m’ont fait.

People can be really sick, taking pleasure in the gruesome destruction and humiliation of their fellow human beings. The French Revolution gave countless examples of this.

The term "Les Tricoteuse" is a Thermidorian one; I am not sure if it appears pre-July 1794. A friend* helped me research this just a short while ago, and she graciously traced the term back to the 'tricoteuses de Robespierre' (Boniface Chrétien, Généalogie véritable et aventures de théophilanthropie, sd and Défense des femmes, des enfans et des vieillards émigrés, 1797), 'tricoteuses de l’opinion publique' who admired Marat, (Comparaison singulière, de J. P. Marat avec Jésus-Christ, sd), and also ‘tricoteuses de tribune’ (E-B Courtois - yes, that Courtois -, Réponse aux détracteurs du 9 thermidor l’an II, 1795). These are the earliest appearances and it should be noted that this means the term was coined well after the Terror was finished.

Rather than being a narrow moniker for harpies who swarmed around the scaffold, it was a term that referenced women who visited the galleries and clubs. At least it was so for contemporary Mercier, who even explicitly distinguished les tricoteuse from the women present at executions ‘Les tricoteuses, sœurs des furies de guillotine’ (L-S Mercier, Le Nouveau Paris, 1797). But it is evident that he sees no difference in the virtue of women who watch men dabble in politics and women who watched people's heads fall off.

This is not to say that there weren't women who went to see the executions, but it should be recalled that people of all sexes and ages and classes went to see what amounted to public spectacles. I'd wager that if we could take a census we'd find that they were frequented by much the same people who had gone to see executions in the ancien regime.

*The friend in question is Montagnarde1793 of tumblr, to give credit where credit is due.