Marie-Antoinette loved the theater. Here are pictures of her own private theater a Trianon.
http://www.theswellelife.com/swelle_life/2011/08/versailles-series-th%C3%A9%C3%A2tre-de-la-reine.html?utm_source=feedburner&utm_medium=feed&utm_campaign=Feed%3A+TheSwelleLife+%28The+Swelle+Life%29

While the Opera of Versailles was a theatre of court, the small room at Trianon was a theatre of society, as many existed then in residences in the countryside where, to pass the time, the owners and their guests would put together plays or operas. During her childhood in Vienna, Marie-Antoinette had gotten used to these familiar performances. She wanted to do the same with her close relations, princes of the royal family and some rare friends.

In 1780, on the orders of Marie-Antoinette, Richard Mique built this theatre whose severe exterior contrasts with the refined interior which, through its harmonies of blue, white and gold, recalls the opera of Versailles, only smaller since it has a capacity of only a hundred people: the domestic service on the floor and the guests on the first floor behind the boxes with grids. But the greatest luxury is not in the wooded room painted in a false, veined white marble and adorned with sculptures made of pasteboard, it lies in the machinery used for the scenery changes, which was fortunately preserved. On the stage of Trianon, plays by authors who were fashionable at the time, such as Sedaine and Rousseau, were acted out and entire operas were sung, and everyone agreed that the Queen was very good. 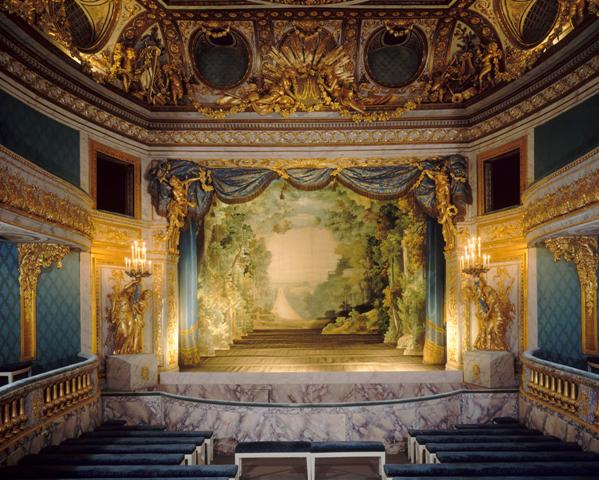