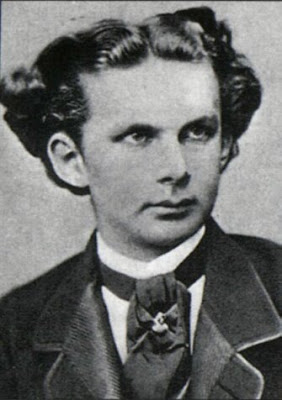 One of the most enigmatic of all monarchs is King Ludwig II of Bavaria (1845-1886) whose life and death are riddled with mystery. At nineteen years old I made a trip to Bavaria and among the main attractions were King Ludwig's castles. I had a sense that he was still so greatly loved by the Bavarian people, as if he were yet reigning. His eccentric behavior and fairy-tale palaces made him a legend in his own time. Although he is generally referred to as "Mad King Ludwig," he was never officially diagnosed. Nevertheless, the accusation of insanity was used to dethrone and incarcerate him. To this day his death is a matter of controversy. (It is strange that his captors would not let him go to Mass.) Some historians believe he was murdered.

In many ways, Ludwig was a medieval knight transplanted into the political intrigues and upheavals of the nineteenth century. In his youth he adored his cousin Sissi, and while their relationship was platonic, it was deep and lifelong. Ludwig relished stories of sublime and impossible loves. He patronized Wagner, whose music brought to life the legends of Lohengrin and of Tristan and Isolde. There is evidence that Ludwig struggled with inclinations that were at odds with his Catholic faith. He gradually became a recluse, spending a great deal of time in the mountains, venturing out only at night. While visiting his hunting lodge at Linderhof, I was told that it had been inspired by Marie-Antoinette's Petit Trianon.

The unification of Germany and the domination of Bavaria by Prussia in the new German Empire were difficult for Ludwig and led him to vigorously retreat into a world of his own creation. He was always loved and revered by the Bavarian people in spite of his increasingly odd behaviors. His death came as a shock to everyone and he was sincerely mourned, at least by the peasants. His castles continue to bring revenue from the many tourists who journey to Bavaria.
_________________
Je pardonne à tous mes ennemis le mal qu’ils m’ont fait.

I believe that Ludwig was murdered.

I love his vision and his love of beauty and his sincere desire to raise the awareness of his people. He created theatres to bring culture to the country and he lived absolutely according to his own lights. It is sometimes said that he squandered a lot of money creating his castles etc. but he only used his private finances (and hence fell into huge debt) rather than bankrupting the nation, as subsequent 'rulers' did by spending even more money on armaments!

It strikes me as so ironic that he - a man of such sensitivity and beauty - is seen as the 'madman' of Bavaria, when, only a few decades later Munich was the centre of Hitler's vile regime. Who was the real madman?

It can't be denied that Ludwig was way out-of-touch with what is seen as reality and it is tragic to think of him floating around on his swan-like boats on artificial lakes, with his terrible toothache, but it sometimes seems that there are beings in this world who have a vision of something so beautiful that it transcends the mundane. Ludwig, I think, was such a man....and, of course, people who long for power cannot see beyond the ends of their noses and so Ludwig, like many other visionaries or dreamers, had to be removed....

I could not agree with you more, Christina. Yes, he had that terrible toothache and he drank too much champagne, which did not help his already eccentric way of life. Not reasons to murder him, though. They had to kill him because of what he represented.

Here are some reflections from Theodore Harvey:

Shamefully, I somehow neglected to post in June about the 125th anniversary of the mysterious death of Bavaria's legendary King Ludwig II (1845-1886), which was commemorated on June 13 near the site of his death with a mass attended by Duke Franz and other members of the Bavarian royal family. So, prompted by a video about Neuschwanstein posted at my monarchist forum, I'll post about it now, as there is never a bad time to remember one of my favourite characters of royal history. To me Ludwig II is the epitome of why I love hereditary monarchy and its potential for elevating people who would never have become heads of state in any other system. It is impossible to imagine an eccentric lonely dreamer such as King Ludwig, in many ways ill suited to politics, winning a presidential election, yet 125 years later, his legacy continues to enrich Bavaria and the world incalculably in the form of magnificent castles (that have paid for themselves many times over in tourism) and the operas of Wagner, which almost certainly could not have been completed and produced without his romantic patronage.

It is encouraging and moving to see how many Bavarians still revere the memory of their "Märchenkönig." The Atlantic has a remarkable collection of beautiful large photos about King Ludwig, his castles, and the commemoration of his death. Bavarian monarchist sentiment (despicably suppressed by occupying Americans after World War II) is not unanimous; a few disrespectful republicans reportedly staged an "anti-monarchist swim" in Lake Starnberg, though the numbers of those honouring their beloved King seem to have been much larger. I salute those Bavarians who continue to keep traditional Bavarian culture and the memory of the great Wittelsbach dynasty alive and wish I could have been among them in June. Current prospects for restoration unfortunately appear slim, but we must never lose hope. Long live the Kingdom of Bavaria!

That's excellent. You know, he really loved his people and I wonder if he knew his castles would enrich the land. It is the same with the French palaces, which bring revenue to the French people to this day.

*Bumping up an old thread*

Of interest, Mad Monarchist profiled Ludwig II of Bavaria on his blog:
http://madmonarchist.blogspot.com/2015/03/monarch-profile-king-ludwig-ii-of.html