I am looking forward to the new biography of Marie Antoinette that will be coming out by Elena. Should be accurate and a good read! Hopefully featuring a loving couple who stood by each other through so many trials and tragedies.

Which I know will be the case since Elena is writing it. I trust her views on the good King and Queen most of all

Sorry for the wait. The book is finally about finished. I am waiting for the galley for one more read through. Here is the cover. 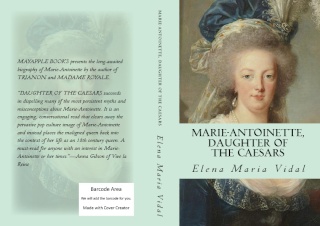 I'll make an announcement when it is published.

It is published on Createspace.

It will soon be available internationally on Kindle and Amazon!

Mayapple Books  and I are happy to announce the publication of Marie-Antoinette, Daughter of the Caesars: Her Life, Her Times, Her Legacy, available internationally from Amazon. It is my first non-fiction book. Whenever possible I have let the historical persons speak for themselves out of memoirs and letters. I try not repeat too many of the well-known anecdotes that are rehashed in other books but if I do, it is to look at the incident from a different angle. I will cite other biographies as well throughout the course of the book. As for the subtitle, Daughter of the Caesars, I think it is important to see Marie-Antoinette in light of her Imperial heritage as a child of the Habsburg dynasty. The Habsburgs assumed the crown of the Holy Roman Empire in the 1400’s, the crown which had originated with Charlemagne in the year 800, seen as the continuation of the Roman Empire of the West. The Habsburgs and their allies kept the Muslims from overrunning Europe at both the Battle of Lepanto in 1571 and at the battle of Vienna in 1683. Indeed, the four crowns which adorn the tombs of the Habsburgs in the Capuchin crypt in Vienna are the crowns of the Empire, of Hungary, of Bohemia, and of Jerusalem, the latter being a throwback to the days of the Crusaders. In those four crowns are symbolized much of the history of Christendom. The fall of Marie-Antoinette, as both Queen of France and the youngest daughter of the Imperial Family, is indicative of the end of Christian civilization and the birth of the secular state, which was the object of the French Revolution. Through her death, Marie-Antoinette has been dubbed “Martyred Queen of Christian Europe” for in killing her the revolutionaries also symbolically killed all that she represented, the ancient heritage of Christendom.

Daughter of the Caesars succeeds in dispelling many of the most persistent myths and misconceptions about Marie Antoinette. It is an engaging, conversational read that clears away the pervasive pop culture image of Marie Antoinette and instead places the maligned queen back into the context of her life as an 18th century consort. A must-read for anyone with an interest in Marie Antoinette or her times. —Anna Gibson of Vive la Reine

The book would have been impossible a decade ago, because the French language sources necessary for such a work were often difficult to acquire even on inter-library loan. However, so much is now available on the internet and, to my joy, out-of-print books that I thought I would never find, I have discovered online, or tracked down in vintage book stores by googling. Rare books, such as the Authentic Trial at Large of Marie-Antoinette, which is the first English translation of the Queen’s trial as originally printed in British newspapers in 1793, are now accessible online. Since I want this book to be a helpful tool for young scholars I have made sure there are lots of notes with further information. I expect this book to go through future editions since my own studies on the Queen never end; there is always more to learn.
Available internationally from Amazon: http://www.amazon.com/Marie-Antoinette-Daughter-Caesars-Times-Legacy/dp/1530934486?ie=UTF8&qid=&ref_=tmm_pap_swatch_0&sr= 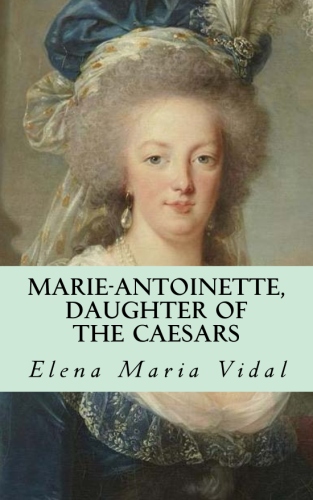 Here is the book trailer.

Here is a review by Sarah Patten: http://herstoryline.com/2016/08/23/review-of-marie-antoinette-daughter-of-the-caesars/

Marie-Antoinette, Daughter of the Caesars: Her Life, Her Times, Her Legacy by Elena Maria Vidal left me a lot to think about.

Elena Maria Vidal is a fantastic writer and researcher. She paints a realistic portrait of Marie-Antoinette with facts to back all of it up. It’s very exciting. This book is spiritual, adventurous, and sweet.

I was especially surprised to learn about two specific pieces of unique artwork. It was fun to find out that Louis XVI kept a certain, flirty picture of Marie-Antoinette on his desk in which she’s dressed like a goddess holding a vase with his profile on it. The other one was a tearjerker sketch of Marie-Antoinette entering heaven to her welcoming husband and her two children who died before her.

One of the most memorable scenes comes from a memoir of a servant who witnessed Louis XVI coming into Marie-Antoinette’s room. While he’s being comforted by his wife, she commands the servant to leave.

From other examples, it’s obvious he suffered from depression, but with all the exterior events and past memories, who could blame him? And shouldn’t Marie-Antoinette get the most dedicated wife award? She stuck with him despite the multiple times he wanted her and their children to go to safety.

The spouses gave each other strength and were concerned parents. After their deaths, their daughter was provided for thanks to Louis’ emergency fund and Marie-Antoinette’s diamonds that had been sneaked out of France.

Thank you, Ms. Vidal, for providing so much information that makes me want to learn more!

Here is praise for Daughter of the Caesars from the French Forum Le Boudoir de Marie-Antoinette. http://maria-antonia.justgoo.com/t6559p25-marie-antoinette-daughter-of-the-caesars-biographie-de-marie-antoinette-par-elena-maria-vidal

Here are some broadcasts on the book. http://teaattrianon.blogspot.be/2016/05/recent-broadcasts-about-marie.html

Here is an interview with me by author and radio show host Genevieve Kineke. http://teaattrianon.blogspot.com/2016/07/marie-antoinette-as-scapegoat.html

Here is a quote from a letter I received from a reader in Belgium: "I immediately began to read, and I really love your style. I love the way you tell us stories about Marie Antoinette and how you put yourself in these stories. This way of writing deeply touch me because it is very personal and it's like...comfortably sitting by the fire and listening." Marie-Antoinette, Daughter of the Caesars is available internationally from Amazon.com.
https://www.amazon.com/Marie-Antoinette-Daughter-Caesars-Times-Legacy-ebook/dp/B01F4JX940/ref=as_sl_pc_as_ss_li_til?tag=httpteaattria-20&linkCode=w00&linkId=fbefb742cfb90045e629c1d5692eb063&creativeASIN=B01F4JX940
_________________
Je pardonne à tous mes ennemis le mal qu’ils m’ont fait.

it is a good book