Tea at Trianon Forum :: The Irish

Here is a fanciful image of St. Dymphna, a 7th century Irish virgin and martyr who became one of Belgium's most beloved saints. I have always been fascinated by her story. According to tradition, she was the beautiful daughter of Damon, an Irish king. Her father was pagan, but Dymphna and her mother were Christians. At the age of fourteen, Dymphna lost her mother. Insane with grief, Damon sent his messengers searching the land for another bride who matched his dead queen's beauty. When no other substitute could be found, the king's wicked advisers recommended he wed his own daughter! To protect her chastity, Dymphna fled abroad with her confessor, St. Gerebran. They sought refuge near the Church of St. Martin, in Geel, near Antwerp, Belgium. Damon, however, hunted them down, killed Gerebran and begged Dymphna to return to Ireland as his bride. When she steadfastly refused, the king flew into a rage, drew his sword, and beheaded her. She was only 15 years old. The young martyr of purity was buried in the church of Geel, and became a revered local saint.

Since medieval times, St. Dymphna has been invoked as the patroness of the mentally ill. Many cures of insanity and epilepsy have been attributed to her relics and intercession. Her cult inspired Geel's centuries-old tradition of charitably caring for the mentally ill. An infirmary was founded in the 13th century and today the city boasts a world-class sanatorium. Geel is famous for its early adoption of the "deinstitutionalized" mode of psychiatric care. For hundreds of years, patients have been placed with local families, taking part, during the day, in the life and work of the town. It is only at night that they return to the hospital. Thus, they benefit from a gentle, kind surveillance, while living as normal a life as possible.

Here is a prayer to St. Dymphna:

Hear us, O God, Our Saviour, as we honor St. Dymphna, patron of those afflicted with mental and emotional illness. Help us to be inspired by her example and comforted by her merciful help. Amen. 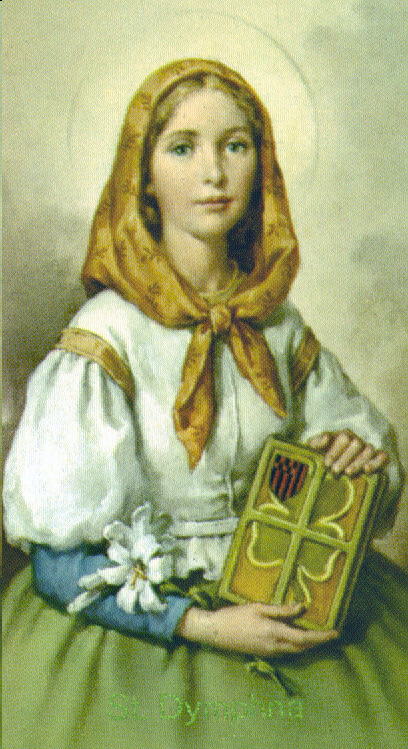 Tea at Trianon Forum :: The Irish