Most of the great poetry in Western civilization was written by men for the women they loved and admired. Do men still write poetry for women? Does courtship exist? Do women see themselves as persons whose love is a precious gift to be bestowed only on the man who proves himself to be worthy? Or have we become so desperate for affection that we give ourselves for less than nothing? If we hold ourselves so cheap, then how can we be the inspirations for great art, poetry, literature and music, as were our sisters in the past.

Why are women no longer wooed? According to an article entitled "The End of Courtship," Leon Kass writes:

The change most immediately devastating for wooing is probably the sexual revolution. For why would a man court a woman for marriage when she may be sexually enjoyed, and regularly, without it? Contrary to what the youth of the sixties believed, they were not the first to feel the power of sexual desire. Many, perhaps even most, men in earlier times avidly sought sexual pleasure prior to and outside of marriage. But they usually distinguished, as did the culture generally, between women one fooled around with and women one married, between a woman of easy virtue and a woman of virtue simply. Only respectable women were respected; one no more wanted a loose woman for one's partner than for one's mother.

The supreme virtue of the virtuous woman was modesty, a form of sexual self-control, manifested not only in chastity but in decorous dress and manner, speech and deed, and in reticence in the display of her well-banked affections. A virtue, as it were, made for courtship, it served simultaneously as a source of attraction and a spur to manly ardor, a guard against a woman's own desires, as well as a defense against unworthy suitors. A fine woman understood that giving her body (in earlier times, even her kiss) meant giving her heart, which was too precious to be bestowed on anyone who would not prove himself worthy, at the very least by pledging himself in marriage to be her defender and lover forever.

So what is to be done? Women lowered the bar, and women must raise it again. Gently insist upon being treated like a lady, but then, if you do, it is important to actually be one. If everyone would be conscious of the fact that each individual is made by God and beloved by Him, then we will not only not allow ourselves to be degraded by loose behavior but we will not want to be the instrument through which others might fall. 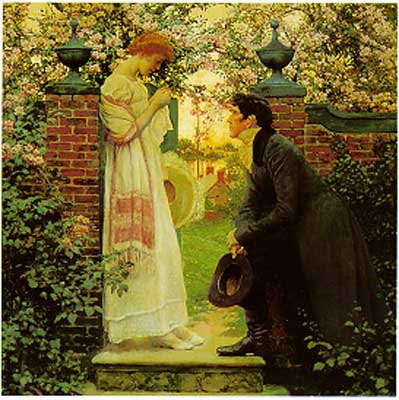 Elena, thank you for this wonderful and thought-provoking post.

I love this: “The most important thing a father can do for his children is to love their mother”. ~ Rev. Theodore Hesburgh

Duchess Lylia wrote:Elena, thank you for this wonderful and thought-provoking post.

I love this: “The most important thing a father can do for his children is to love their mother”. ~ Rev. Theodore Hesburgh

Isn't that the truth! Otherwise you have nothing but ashes.

Despite my quote (which I truly believe could transform the world, by the way, if men strove to live by it) -- there are many remarkable and lovely women (I personally have known a few) whose fathers cherished and loved them (and their mothers) unconditionally, and who nevertheless wasted years in giving themselves to men who didn't deserve them. These matters of the heart are very difficult to understand, and we all have our individual journeys as we find our ways. But thankfully, God's grace is sufficient to overcome anything, no matter what!

And P.S. I agree that the key, regardless of whatever circumstances dictated one's upbringing, lies in teaching all women that they are the Lord's treasures, to be prized and won and honored. It is so difficult within this culture, but it is something that we must strive for.
_________________
After the dustman's compliment, all others are insipid.

I totally agree. Women need to value themselves and refuse to be treated as objects.