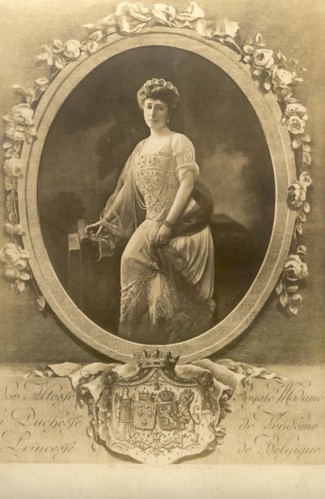 Here is a post about a favorite French royalist of mine:
http://crossoflaeken.blogspot.com/2010/02/henriette-royalist.html

In 1896, Princess Henriette of Belgium, niece of King Leopold II, married an Orléans cousin, Prince Emmanuel, Duc de Vendôme. (Interestingly, he was a grandson of the Duc de Nemours, the second son of King Louis-Philippe and Queen Marie-Amélie, and an early candidate for the newly created Belgian throne in 1831). It was a happy match and produced four children, three daughters and a son... Dividing their time between Paris and their multiple country estates, Emmanuel and Henriette lived on a grand scale and entertained lavishly.

Very pious and conservative, Henriette became a significant figure of French royalism. Deeply intellectual, fascinated by history, she took full advantage of the goldmine of the Vendôme family archives to conduct serious study of the House of Bourbon. (It is interesting to note that Henriette's niece, Princess Marie-José of Belgium, the last Queen of Italy, was also a historian, acclaimed for her brilliant work on the House of Savoy). The publication of the Journal of Queen Marie-Amélie was one of Henriette's most noted achievements.

With her devout faith, Henriette was earnestly concerned with the spiritual history of France, particularly in the dark hours of the Revolution. She campaigned, for instance, for the beatification of Madame Elisabeth, the heroic and saintly sister of Louis XVI, guillotined during the Terror. At the request of the Vatican and the Carmelites of Meaux, Henriette agreed to become the patroness of Elisabeth's cause. It is touching to note that Elisabeth and Henriette were related, not only through the House of France, but also through the House of Saxony. Of course, both were also sisters of Kings!

If I have emphasized Henriette's devotion to the Catholic monarchy, it is because I have noticed a deplorable tendency, in religious, conservative circles, to condemn all the Orléans as radicals and revolutionaries. It seems that many, remembering only the regicide of Philippe Egalité, hastily paint all his descendants with the same brush, almost as if grace and redemption did not exist for the Orléans family. Yet, this is clearly not the case.