Holy Women in Our Times

Holy Women in Our Times

Here is an article of mine originally published in the May/June 2007 Canticle Magazine.

Some of the greatest souls are those unknown to the world, whose loving influence has, nevertheless, far-reaching effects. There is a painting of the Visitation showing Saint Elizabeth with arms open wide to welcome the Blessed Virgin. The representation of Elizabeth always reminded me of a Visitandine nun, Mother Mary Paula, a petite, slightly bent frame, shrouded with a veil, vibrant with the Holy Spirit.

My first teaching job was at the Visitation Academy in Frederick, Maryland. I would come to regard Mother as a spiritual mentor, from the simple truths she imparted in her words and by her life. I learned by example the power of gentleness, as promoted by the teaching of Saint Frances de Sales, founder of the Visitation Order, who said: “Honey catches more flies than vinegar.”

The Frederick Visitation had been educating young ladies since 1846; it was a boarding school, and in the mid-1980’s still functioned as such. Most of the boarders were Mexican girls; there would be about twenty of them and the other hundred or so girls were day students, grades pre-K to 8. The school adjoined the cloister and both were surrounded by a high wall, so the academy was essentially in a monastery garden under the shelter of ancient trees. There were about five sisters left in the monastery; three were actively teaching. When advised to close the Academy, Mother Mary Paula would reply with the words Saint Joan of Arc uttered in another equally desperate situation: “You have taken your counsel, and I have taken mine….” The sisters ran the school for another twenty years, a decade after Mother’s death.

Mother Mary Paula was a steel magnolia. From a Baltimore family of Irish descent, she had a soft face and a gentle lilting voice. To see her sparkling eyes at Mass behind the choir grate at the Elevation of the Host was to share for a moment with her a glimpse beyond the veil of time. Her practicality in dealing with the children never failed to amaze me. She told me once, “The world is a frightening place for little ones. I want this school to be one place where they can feel safe and happy.” And she succeeded in her task. To a pouting child she would say, “If the devil can’t make you bad, then he will try to make you sad.” If a girl was crying she would say, “Let’s go to Mother Mary’s house.” Mother Paula would put her arm around the student and they would stand in front of a statue of the Virgin, and explain the problem, whatever it was. Blessed Mother always helped.

Mother Mary Paula was the soul of truth, and yet there were times I knew she was using mental reservation in dealing with certain willful young ladies. One late November there was a light, slushy snow, mostly ice, but the Mexican boarders, who had never seen any kind of frozen precipitation, wanted to romp in it. Mother was afraid they would get wet, cold, and sick, and so she said, “Girls, this isn’t real snow. It just looks like snow.” The girls crept outside anyway, slid joyfully through the slush, and yes, many were feverish and sneezing the following day.

Then there was the case of the girl I will call “Sage.” Sage was one of the most notorious mischief makers in the history of the Academy. She was not malicious, only constantly disruptive in class. At the end of the year, the sisters would distribute awards, usually some homemade stuffed animals. Every single child received a prize, the Visitation being the Visitation. As Mother Mary Paula distributed the gifts, she would say, “Now so-and-so has been very obedient this year….” She described each girl along the same lines, obedient and polite. Then it was Sage’s turn to receive her gift. Now even the naughtiest of the boarders had had moments of obedience and politeness, but everyone held their breath over Sage. They all knew that Sage had been completely recalcitrant. Was Mother Mary Paula about to tell a lie?

“Well, Sage, we made it through this year, and we’ll make it through next year.” An audible tension lifted from the room. Mother’s integrity was saved.

In her last years, Mother saw the Visitation flourish with an increase of students, while growing numbers of lay people and seminarians used the chapel for First Friday devotions and daily Mass. The Academy became a thriving center of genuine Catholic spirituality. Once, I was with Mother in the chapel, a masterpiece of grandeur and simplicity, with the stained glass windows, carved wooden columns and marble high altar.

“Do you see this chapel, Mary?” she asked. “The sisters who built this chapel did not even have money for food. But they had faith, great faith. All we have to do is pay a few bills; out of nothing they built this masterpiece which gives glory to God.”

With the burden of age and pressures of running the school weighing upon her, Mother’s health eventually gave way. She bore her last illness with serenity and had to be hospitalized, but towards the end they brought her home. Adoration of the Blessed Sacrament was in progress and as they brought her through the chapel; she turned and gazed upon Our Lord in the monstrance with the most radiant expression. She died on the feast of Saint Joseph, March 19, 1996. To be the Bride of Christ is to be a spiritual mother; the little nun had been a true mother to so many.

I often recite Mother Mary Paula’s prayer with the girls whom I teach. She prayed it before every class.
Dear Jesus, please help us with our lessons. Help us to use our lessons for you, and everything else we do. And make us grow in wisdom, age, and grace like you. And make our hearts like yours. And make us good housekeepers like Our Blessed Mother, and grant us your peace. Amen. 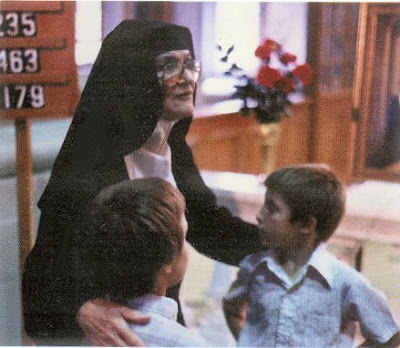 All these years later and the school is thriving.

I went to the chapel during a high school day retreat held at our parish.
I don't know if you'd heard the boarding school had to close because of declining enrollment.