The British princess who was to become the beloved Queen of Romania wrote of herself:


I was hardly seventeen when I came among my people. I had left a home I loved and all the faces that had been familiar to the days of my childhood. At first it was not easy. I had to steal my way into hearts that were foreign to me, to get accustomed to strange faces, to strange habits, to a foreign tongue. It was years before I felt at home.

Yet from the very beginning I loved the land and its people. I understood the country’s varied beauties. I was in sympathy with its silent peasants, its vast fields, its deep forests and its rocky mountains. At first I was much too young to comprehend its soul and, with it, its needs and its longings.

Marie of Edinburgh (1875-1938) was the granddaughter of Queen Victoria on her father's side; her maternal grandfather was Tsar Alexander II of Russia. She fell completely in love with Romania. Marie started out as an Anglican, and converted to Orthodoxy in 1926. She may not have had the most edifying private life although she at least was discreet. However, in spite of an awful marriage Marie persevered to become the leader her people needed in the dark days of World War I. She used her personal charm as well as her pen to bring the needs of her country to the attention of the world.


For the Queen of Rumania is a woman of remarkable beauty, gifted alike in feature and texture of skin, the whole played upon by the glow of a charming graciousness of manner and spirit. No picture is adequate to portray the unique quality of her loveliness. When she speaks, it is not only with her lips, but also with the swift play of her countenance, the flash of her eyes, the motions of her head and body, and the gestures of her hands. One's thought turned instinctively to the delight that Queen Victoria would have had in the beautiful blossoming of this one of her granddaughters.

As another article says:

Meriel Buchanan wrote a touching tribute to her: "Whatever mistakes she may have made, she was never petty or trivial or ungenerous. If she brought sorrow to some, she brought joy to thousands of others by her gaiety and magnetic personality. When she came into a room, she seemed to bring light and animation with her, stimulating by her appearance even the most elderly and weary statesmen and Court attendants, making them forget their aching feet and straighten their tired backs in a sudden alacrity."

Marie had six children, all of whom had difficult lives, except for the one who died as a baby. Her youngest daughter Princess Ileana eventually became an Orthodox nun. Marie was one of the last great European monarchs, trained in the tradition of putting their people first. 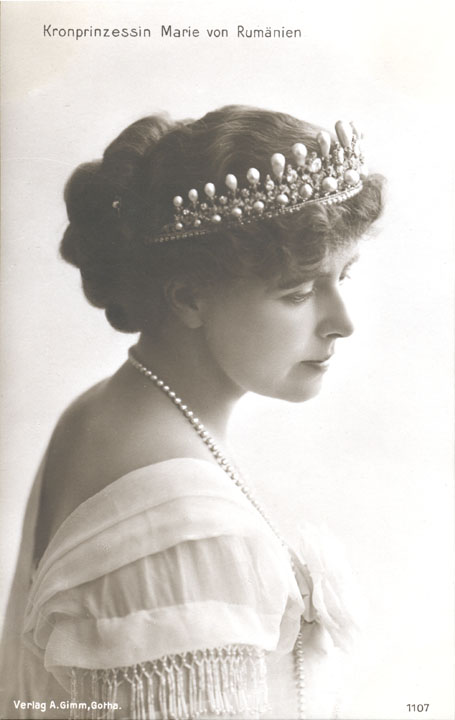 Very dramatic portraits! She comes across as a very powerful personality.

Doesn't she though? Of course, she was the granddaughter of both Queen Victoria and Tsar Alexander II.

King Carol I refused to have a crown made from precious metals and demanded one made from the steel of a turkish cannon, to symbolize the fact that the Independence was won by the soldiers on the battlefield. He did not think a gold crown would honor the memory of those who paid the ultimate price for the Independence.

The Crown can be seen, along with the rest of the royal artifacts, at the National History Museum of Romania, in Bucharest.

I always found her to be stunningly beautiful. And a wonderful person too. She really fell in love with the Romanian people and did everything she could to help them.

The "Royal Romania" blog features royal regalia and more:
http://royalromania.wordpress.com/
If the owner's name looks familiar, Mrs. Mandache is also a contributer at "Lost in the Myths of History" blog.

Here is Marie as Crown Princess:

Let love remain our brightest goal, let it be the ultimate desire of our souls, but do not let us drag it down, tarnish it by reducing it to lust.

Love has been the inspirer of all great deeds, the leader towards every ideal: love of God, love of man, love of woman, love of child, love of country, love of life. It wings our feet, doubles our courage, our energy. It throws light into darkness, spreads glamour over the meanest world.

Love lies in all things: in the silence of night, in the fires of dawn, in the great waves of music, in color, sound and harmony. Love lies at the core of every faith, every hope, every ecstasy. Love banishes fear and makes a hero out of the coward; love understands and forgives, hopes, believes; love has tender hands and gentle lips; a word of love can turn the wicked back from his sin, can open out a vision of light to the man who was hopeless.

Ah, but I am being carried away and I find myself suddenly talking of that greater love, of the one I started by calling "the love the Bible speaks of"; and I see that I cannot separate one from the other, for if the love man for woman contain none of that greater love—then I for one would have none of it!

Beautiful. Look at what she says about family, morality and "free love":

I, for one, believe in family, in that great force of order and decency it represents. A happy home is certainly the ideal form of living; but I also know that many homes are hell, that children who live under the rule of quarreling parents are miserable. Yet the child who has no home is not a happy child, either.

If free love were ever officially sanctioned the children's part, it seems to me, would be pitiable. But then I am not quite a modern woman. I recognize duty and obligations and they have made me grow in strength.

My children were everything to me and worth the sacrifices made for them; they were my very reason for existence, and unbearable to me would be the thought that they should become homeless because I want to be free.

To love and pass on seems from my woman's point of view a very low conception of things. I do declare, though, that from the earliest times women have been unfairly treated in a way that must not and cannot be tolerated indefinitely. But love reduced to pleasure alone I cannot imagine. If we bring it to that I certainly think that we will be crushing all ideals, all poetry, all beauty out of the world to make out of it a cynical, ugly place.

An account of the coronation at Alba Iulia in 1922. http://onceiwasacleverboy.blogspot.com/2012/10/coronation-at-alba-iulia-1922.html To quote:

King Ferdinand I of Romania and his wife Queen Marie were crowned in a non-denominational ceremony on October 15, 1922, in the square in front of the Coronation Cathedral of the Reunification. The ceremony was non- denominational because, although Romania was overwhelmingly Orthodox, the King was a devout Catholic and his wife was then an Anglican.

King Ferdinand's two successors, King Carol II and King Mihai I, however, had only swearing-in ceremonies. King Carol II, upon ascending the Throne in the summer of 1930, did schedule a coronation in Alba Iulia for the following September; but, a few weeks before the planned ceremony, the coronation was postponed and was never to be re-scheduled, because of the complicated situation with Carol's ex-wife, Queen Helen, who due to their divorce obviously could not be crowned with him, but was nonetheless living in Romania as "Queen Mother Helen" or Her Majesty Helen.

The Coronation was very much a celebration of the post-war unification of the Romanian people under one King. thus the pre-war kingdom based on Wallachia and Moldavia was now unired to Bessarabia [ now Moldova], Transylvania and the Dobruja. The diplomacy at the Paris Peace Conference which achieved this owed no little part of its success to Queen Marie's presence, and the Coronation was very much her day. As the links above show, she was a somewhat larger-than-life figure, who won the hearts of her Romanian subjects by he enthusiastic support of the national cause during the First World War and the subsequent developments. Here are views from a set of postcards of the ceremony:

Here is Queen Marie with her grandson the future King Mihai (Michael).

Lovely. Here she is working as a nurse.