Rembrandt and the Face of Jesus

Rembrandt and the Face of Jesus 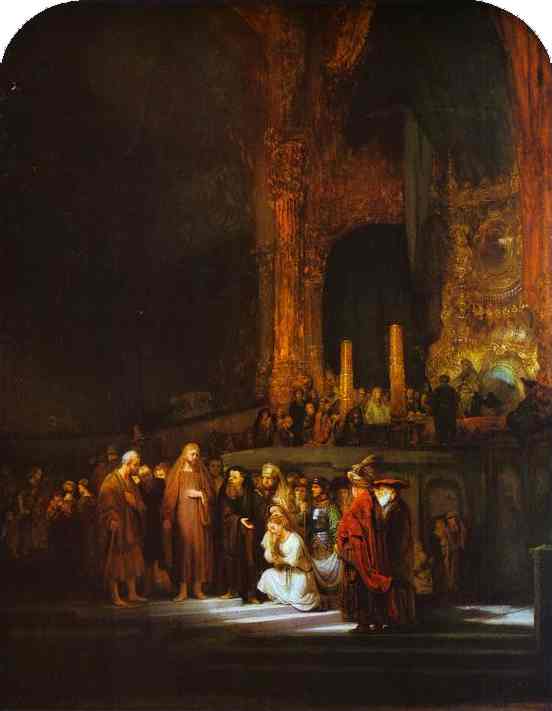 http://1.bp.blogspot.com/-uNY5sQ0ONhQ/Tkxprvuf0wI/AAAAAAAAGHk/S4y_SR8GEyo/s1600/rembrandt173.JPG
Two masterpieces—one at the beginning of the exhibition, the other near the center—establish the principal theme. In "Christ and the Woman Taken in Adultery" (1644), the 38-year-old Rembrandt followed longstanding conventions by depicting Jesus with pale skin, a high forehead and flowing chestnut-colored hair. The painting's subject, one frequently depicted in art, comes from the Gospel of John, in which the temple scribes and Pharisees come before Jesus with an adulteress and demand that she be stoned in accordance with the law. To their surprise, Jesus responds, "He that is without sin among you, let him first cast a stone at her." Yet Rembrandt shows us a moment not of action but of contemplation, as Jesus calmly considers the charge against the woman who kneels at his feet. An atmosphere of silence pervades the towering space of the temple, and all of the drama depends on a subtle interplay of gestures and glances.

A similar sense of anticipatory quiet pervades "The Supper at Emmaus" (1648), in which the risen Christ pauses before revealing his identity to two disciples over a meal at a humble inn. This was the first major work in which Rembrandt portrayed Christ with olive skin, dark hair and facial features like those of Jewish men he knew from Amsterdam, and it is a true landmark in the artist's career. As Seymour Slive, the renowned Harvard scholar of Dutch art, has written, "To Rembrandt the Jews were the people of the Bible, and with his deepening realism he wanted to become more authentic in his biblical representations." So seriously did Rembrandt take the question of authenticity that "The Supper at Emmaus" depicts Christ about to break a loaf of traditional Jewish challah bread, clearly identifiable by its braided twists.

Three rooms of fairly small works flesh out the show's intellectual background. The first presents images of Christ in prior European art, demonstrating canonical approaches to portraying this all-important figure, whose physical appearance receives scant mention in the Bible. The second shows Rembrandt's engagement with these traditions through his youthful graphic work, including a famous red-chalk drawing after Leonardo's "Last Supper." And the third offers a sampling of Rembrandt's earliest images of 17th-century Dutch Jews.

Here, we learn that Rembrandt lived on the edge of Amsterdam's largest Jewish community, which was populated by both Sephardic and Ashkenazi Jews, almost all of whom were refugees from persecution elsewhere in Europe. The mostly impoverished Ashkenazim, with their untrimmed beards, long hair and traditional garments, particularly captured the artist's attention, as can be seen in a sensitive black chalk drawing of a seated Jewish craftsman at work and in a rapidly executed oil-on-panel "Portrait of a Young Jew" (c. 1648).